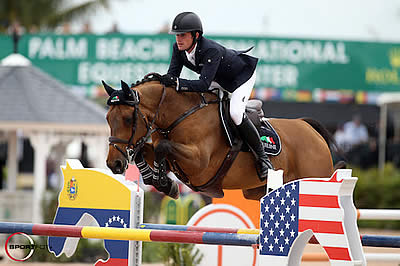 Wellington, FL – March 24, 2016 – Week eleven of the 2016 Winter Equestrian Festival (WEF), sponsored by Artisan Farms, continued on Thursday with a win for Darragh Kenny (IRL) and Red Star d’Argent in the $35,000 Ruby et Violette WEF Challenge Cup Round 11. Competing in the International Ring at the Palm Beach International Equestrian Center (PBIEC) in Wellington, FL, the pair beat out Kent Farrington (USA) and Creedance in second, and Lorenzo de Luca (ITA) aboard Limestone Grey in third.

Competition concludes on Sunday with the $86,000 Suncast® 1.50m Championship Jumper Classic also held on the derby field at The Stadium. The 12-week WEF circuit continues through April 3 offering more than $9 million in prize money.

Olaf Petersen, Jr. (GER) set the course for the $35,000 Ruby et Violette WEF Challenge Coup Round 11 on Thursday with 65 entries and 17 advancing to the jump-off. Eight of those were able to complete double clear rounds over the short course with Darragh Kenny and Red Star d’Argent clocking the fastest time of 37.52 seconds. Farrington and RCG Farm’s Creedance finished just off the mark in the slimmest of margins in 37.53 seconds to place second. De Luca and his own and Stephex Stables’ Limestone Grey followed with the third place time of 38.51 seconds.

Red Star d’Argent is an 11-year-old Selle Francais gelding by Quick Star that Kenny’s Oakland Ventures and Sergio Alvarez Moya own in partnership. Moya sent the horse to Kenny to be sold this winter, and the pair has had fantastic results. They already won the $130,000 Grand Prix CSI 3* during week six competition, as well as the $216,000 Lugano Diamonds Grand Prix CSIO 4* in week eight.

Speaking of what he has learned about the horse, Kenny stated, “He likes to win. He is a fighter. He wants to be careful, he wants to be good, and he wants to win. I just have to not screw it up.

“He has been doing great, so we will just take our time and see what happens,” the rider continued. “I am having a lot of fun. He is a great horse. He twisted a shoe two weeks ago and put the clip up his foot and was lame for a few days, so we could not ride him. I only started riding him again on Saturday, and jogged on Tuesday and he felt good, so we went today. He is just an incredible horse. I have used him very sparingly this winter, but every time he comes out, he comes out great.”

Coming out the ring after Thursday’s jump-off, Kenny did not think that he had done enough to get the win with the fast combinations still to go, but he got a little lucky.

“I did not think I was fast enough. Kent is extremely fast, and he actually would have been faster,” Kenny explained. “He did one more stride to the last fence just because his horse shifted right at the second to last, but he would have been faster otherwise. I kind of got lucky there. There were a lot of fast riders like Lisa Goldman, and a couple of the others still to go, so you never know until the end.”

Detailing his jump-off, Kenny noted, “It is kind of the same thing I do with that horse. He is quick, and I just go as fast as I feel I can. I felt I was a little bit slow to the orange vertical, and that is where I thought I left a bit of time, but I knew that was the right thing to do for him. He felt great, and the rest of it was super. Kent’s horse is a super horse and Kent is an amazing rider and I knew he was going to be very fast, so I had to do as much as I felt comfortable with.”

In addition to the winning prize money, Kenny earned a $3,000 bonus for wearing his SSG ‘Digital’ style riding gloves as part of the SSG Gloves ‘Go Clean for the Green’ promotion.

Also competing in the International Ring on Thursday, the day began with a win for Lauren Hough (USA) and Paris Sellon’s Adare in the $8,000 Illustrated Properties 1.45m jump-off class.

Louise Serio, of Kennett Square, PA, rode SS Telling Secrets to the championship title in the Perfect Products Pre-Green Hunter Level 2 (3’3″) this morning in the Rost Arena. Serio and the seven-year-old Trakehner gelding topped the under saddle and one of the four over fences classes on their way to the championship win. The pair also earned a fifth-place ribbon in another over fences class. Heather Hays and Stacey Shore Werner’s Sebastian took home the reserve title, placing first, third, and fourth over fences. Sebastian, a six-year-old Holsteiner gelding, also earned a fourth-place ribbon in the under saddle.

Rain clouds circled around the show grounds for much of the morning, but veteran rider Louise Serio was not daunted by the potential for bad weather. Despite some windy conditions, Serio and SS Telling Secrets performed consistently well. “Today he got a little bit green in the first round and over-jumped some. In the second round he went really nicely,” Serio commented.

Serio was pleased to have a successful first outing with new mount SS Telling Secrets. She plans to take things slowly with the young gelding. “He hasn’t shown much before; he’s only shown four other times in his life,” she explained.

SS Telling Secrets is indeed a very new horse for the team at Derbydown Farm. The gelding was only purchased one week ago. “We just bought him,” Serio commented. “We bought him through Kim and Andy Marone. He had only shown one other time here at WEF, which we got to see, and then we purchased him just last week.”

Serio expressed a lot of excitement about the new acquisition and is enthusiastic about the young gelding’s future. “We are very excited. He’s gone very nicely so far!” Serio said.

“He has an outstanding disposition,” Serio remarked. “He’s just really, really quiet, and we are very happy. He’s been really pleasant since the purchase.”

SS Telling Secrets is a stunning mover, which is what convinced Serio to purchase the gelding. “He’s just a gorgeous mover,” Serio stated. “He won the under saddle in this division yesterday, and I think he will continue to do well in the under saddle classes wherever he goes.”

Serio plans to continue showing SS Telling Secrets in the Pre-Green Hunter divisions. “I plan to gear him up to show in the Pre-Green incentive classes,” she added. Serio also explained that the gelding was purchased for amateur rider Meredith Lipke and that she will be taking over the reins and begin showing with him very soon.

The eleventh week of competition at the 2016 Winter Equestrian Festival continues on Friday with the $35,000 Illustrated Properties 1.45m Classic featured in the International Ring in the morning and the 9th Annual George Morris Excellence in Equitation Championships in the evening. For more information and full results, please visit www.pbiec.com.