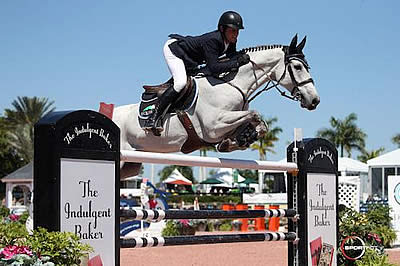 Michel Vaillancourt (CAN) set the course for Thursday’s Challenge Cup, with 78 starters and 21 clear rounds. Four entries opted not to jump-off, leaving 17 to continue on to the short course. Kenny and Vlock Show Stables’ Gasper van den Doorn jumped the fastest of eight double clear rounds in 38.13 seconds.

“I did a turn that nobody else did in the class,” Kenny said of his winning jump-off. “I watched a few people go, and I kept looking when I was in the warm-up ring. I was like, ‘I think that turn is there.’ Then I went in the ring and I saw it. He is such a nice horse that I know he is never going to stop or do anything wrong, so it was only up to me to get the right distance. Then I did everything that everybody else did. I think that turn was where I won the class.”

“I was just playing about with him for a couple of weeks just trying to get to know him a little bit for Teddy,” Kenny noted. “I am now very lucky that Teddy has agreed to let me show him for a few more weeks because I am a little bit short of a grand prix horse.

“Today he was really excellent,” Kenny continued. “I have only jumped him 1.40m before this, but he jumped big classes with Mac Cone before. He jumped clear in World Cup qualifiers at Deeridge and Toronto. He is a really exceptional horse.”

Detailing the horse further, Kenny stated, “He is really fun and super competitive. He is very easy. He is like the perfect horse. He is beautiful to ride; he has this amazing canter, and his jumps are fantastic. He is a really cool horse.”

Kenny and Gasper van den Doorn can be seen back in action together in Saturday night’s $130,000 Horseware Ireland Grand Prix CSI 3*.

The $10,000 Hollow Creek Farm Under 25 Grand Prix Series Welcome was held in the afternoon with a win for Katherine Strauss (USA) and All In. The Series also hosted a 1.40m competition, which saw a win for Kerry McCahill (USA) and Charly Chaplin S.

Scott Stewart of Wellington, FL and Playbook, an entry owned by Fashion Farm, were champions of the Bainbridge Green Hunter 3′ division. Stewart and the coming seven-year-old Warmblood gelding by Samba Hit dominated the division, winning three over fences classes and the under saddle, as well as placing second in another over fences round. The pair has been strong contenders in the division throughout the winter circuit, earning the championship title during weeks one, three, and eight.

Speaking of Playbook, Stewart said, “He is really easy and has a big stride. He moves and jumps incredible and is just the whole package! I rode him in Kentucky in the Baby Greens last May, and he didn’t show again until coming down to Wellington. He has been amazing.”

Holly Orlando of Wellington, FL captured the reserve title aboard Lion King. The duo earned two seconds, third, and fifth place ribbons over fences, and fourth place under saddle. An entry of Sam Edelman’s S & L Farms, Lion King began his hunter career with Orlando at the beginning of the winter circuit as he previously competed in the Five-Year-Old jumper division.

“Lion King is one of my favorite horses,” said Orlando. “He is a very good jumper and is so my type: very soft, carries himself, and looks beautiful through the bridle. I can really gallop out of the turns on him, and he jumps the same every time.”

Orlando was quick to credit much of the six-year-old Belgian Warmblood gelding’s success to Nathanael Estes, who works for Sam Edelman.

“I couldn’t do it without Nate [Estes],” Orlando explained. “He helps ride Lion King and is an excellent person to have on the ground. Nate puts a lot of effort into the horse, and we are both really excited about the gelding.”