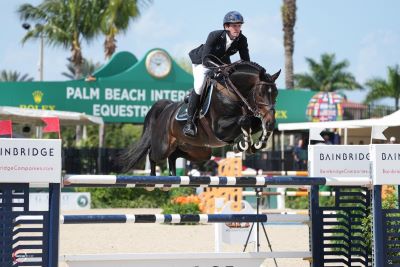 Wellington, FL – March 9, 2022 – The third out of four internationally rated five-star weeks at the 2022 Winter Equestrian Festival (WEF) brought back some of the world’s best riders to the International Arena on Wednesday, March 9. Wednesday’s competition culminated in the $37,000 Douglas Elliman Real Estate 1.45m CSI5* where Ireland’s Darragh Kenny rose to the top aboard Chic Chic.

Top course designer Alan Wade (IRL) set up a power-and-speed track worthy of its 62 opponents as the premier event of the day. The task proved difficult for many, and only 18 managed to navigate fault-free. Of the 18 nations represented in the event, representatives from seven countries earned a clear round while 14 riders suffered from a disobedience or downed obstacle. The Irish dominated the day with Kenny blazing the trail and fellow citizen Mark McAuley taking up second with O’Hara ELS. Kenny went early in the class but proved he still has a knack for speed, holding himself nearly a second shy of any further competitors with a top time of 32.69 seconds. McAuley gave it his best shot but stopped the clock in 33.36 seconds which promoted him to second place with LT Competition’s 10-year-old CH mare by Ogano Sitte x Liandero.

The $6,000 Corro 1.40m CSI2* kicked off the international competition for the week. A total of 64 horse-and-rider pairings stepped forth to challenge Wade’s first track of the week with roughly one-third of the entries managing to successfully navigate the entire course fault-free. As the final horse passed through the timers, Ashley Vogel’s (USA) time of 31.35 seconds aboard Lucy in the Sky stayed good enough for the win.

Jos Verlooy’s (BEL) week was off to a winning start as the athlete took both the first- and second-place honors in the $1,000 Bainbridge Companies 1.40m CSI5*. Out of the 40 combinations, Verlooy left no room for a possible takeover as he rode to the top spot with Eurohorse BVBA’s FTS Killossery Konfusion in 30.63 seconds, and then proceeded to secure the runner-up spot as well aboard Nyjerc Z in 30.77 seconds.