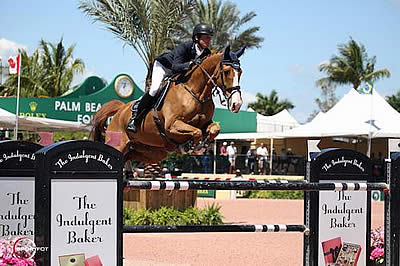 Olaf Petersen, Jr. (GER) set the course for 70 entries in Thursday’s Challenge Cup and yielded 21 clear rounds. With two entries opting out of the jump-off, 19 continued on, and nine were able to clear the short course without fault. Second to go in the jump-off, Darragh Kenny went full speed with Billy Onslow to put the pressure on the remaining competitors. His time of 33.33 seconds held up for the win.

“He is such a cool horse,” Kenny said of the 11-year-old Anglo European gelding (Billy Congo x Iroko) that he purchased from Great Britain’s William Funnell. I just got him three weeks ago when I was in Europe. He did a 1.40m class yesterday, and then this today. Obviously, I do not really know him so well, but he tries so hard and he is super easy to ride.”

Remarking on his jump-off, Kenny stated, “I know he is really brave, really careful, and really scopey, so I just went as fast as I could go. There were 17 people after me, so I knew that if I left the door open at all I would have no chance. He has a massive stride. I did eight strides to the second to last fence and I did eight strides to the last, which nobody else did. I also did an inside turn to the double, which in hindsight probably was not the smartest thing.

“I did the first line, and I knew he had a big stride, but I did not realize just how big,” Kenny detailed. “I did the seven strides really slow and I thought I must have miscounted and done eight, so then I panicked and I thought I had to do something really special to try to win. He was just amazing. He was brilliant. He should not have jumped the double from where I turned back at all. He is so brave and careful. You turn back and you don’t even have to worry. You know he is going to do his best to leave the jumps up.”

Fifty-two entries started over Olaf Petersen, Jr.’s first-round course and 15 cleared the track without fault. Parot and Quick du Pottier went fifth in the order, setting an uncatchable time of 59.14 seconds for the win.

“This horse is very fast,” Parot continued. “I thought I would maybe be in the top three with this time, but I was lucky that I ended up winning it.”

Remarking on his winter, Parot smiled, “It has been a really fantastic season. I think this is the best circuit I have had here. I had a really good summer and then the horses came in to the winter really good. They have stayed really sound and they are all in great shape. This horse is done for the circuit. He was really good all winter and it is nice for him to go out with a win. He and the others will all have a nice vacation until we go to Tryon in May.”

Also competing in the International Arena on Thursday, the Spy Coast Farm Six-Year-Old Developing Jumpers completed their Power and Speed class with a win for Andres Soto (COL) and Julia Tedesco’s X-Lady.

Jimmy Torano of Wellington, FL and Pure Imagination, owned by Ponies & Palms Show Stables, LLC, topped a competitive field of 37 horse and rider combinations in the Marshall & Sterling Insurance Performance Hunter 3’3″ division on Thursday. The pair only showed in two classes, but after winning an over fences round and placing third in the stake, they earned the championship ribbon.

Torano, who had never ridden the coming nine-year-old Irish Sport Horse gelding by Ars Vivendi before, showed him as a favor to friend Joey Currais, trainer of Hunters Landing.

“We just got Pure Imagination to do the Junior Hunters with one of my clients, Isha Swani,” explained Currais. “Honestly, I have had him for four days. I wanted to put Jimmy on him to get a feel of the horse because the horse is going to do the 3’6″ this weekend. I’m beyond words, the trips were beautiful and having somebody of that caliber like Jimmy Torano, it was just a beautiful picture.”

While Currais has only had Pure Imagination in his barn for a short time, he speaks highly of the gifted gelding.

“This is a horse I picked for my client because of his personality, he is kind and forgiving, he has a great record, and a beautiful and quality jump,” continued Currais. “Working with a talented animal like Pure Imagination is a pure privilege.”

Elizabeth Boyd of Camden, SC and Hide Away, an entry owned by Looking Back Farm, captured the reserve honors, only two points overall behind Torano. Boyd and Hide Away won the handy trip and placed fourth in the stake round.