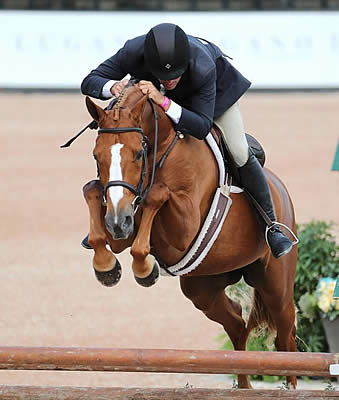 Daniel Geitner and One Request ©Sportfot.

Tryon, NC – June 7, 2019 – Daniel Geitner (USA) and Elizabeth Tarumianz’s One Request were awarded top honors in the $50,000 USHJA International Hunter Derby at Tryon International Equestrian Center (TIEC) with an overall score of 371. Holly Shepherd (USA) with Tybee, a 2007 Hanoverian gelding by Black Tie owned by Helen Brown, finished in second place on a total score of 349. Erin Floyd (USA) claimed third place aboard Any Given Sunday, a 2003 Oldenburg gelding by Indoctro x Victoria owned by Hays Investment Corp., with a score of 347.

Out of 21 pairs to take part in the highlight Hunter class of the Tryon Spring 6 Tryon Riding & Hunt Club Charity Show, Geitner and the 2010 Selle Francais gelding impressed the judges over the course set by Dean Rheinheimer (USA) and secured first place after their handy performance. Last to go in the second round, Geitner was able to observe competitors ahead of him and adjusted his strategy accordingly, he explained.

“It was a beautiful course. It rode a little trickier than it walked. It walked relatively simple and it just rode a little bit trickier than I think we first thought,” Geitner said. “My original plan [in the handy] was to go to the inside to the two stride, but once I realized I probably didn’t have to, it made it relatively easy. Honestly, his [One Request] jumping style is just spectacular, so I just tried to stay out of his way.

“The jumps were beautiful and my horse obviously jumped amazing,” Geitner continued. “This is only his third Derby, and he’s won two of them now. Last year he did the first years, green conformation, and the amateurs with his owner. This year we’ve done just a couple shows.”

Despite his horse’s newness to the International Derby ring, Geitner reported that One Request took to the atmosphere of Tryon Stadium well: “He was great [in the atmosphere]. Not much phases him, and actually it really had him jumping. He was not close to any jump, and really rose to the occasion,” he said. “I thought the first round was great, and I thought he was even better in the handy. He just jumped higher and higher the more we went.”

Geitner will keep competing One Request in more Derbies, hoping to continue their success thus far, and plans to aim for Derby Finals ahead of the indoor season, he explained. “We just got back from Devon. We sent some ponies here a couple weeks ago with our assistant, but this is our first week. We are happy to be back.

“Unfortunately, we go back home next week, but we come back in July for a couple weeks and for sure a few weeks in the fall,” concluded Geitner. “I personally won’t come back here for Pony Spectacular [Tryon Summer 3] but I hope my wife and some of the pony kids are!”