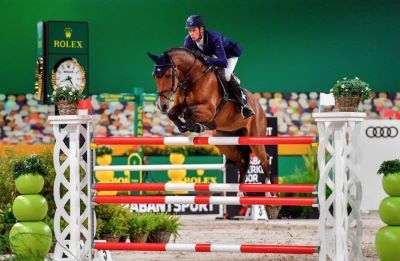 The VDL Groep Prize was the highlight of Day 1 of the 2021 edition of The Dutch Masters, and attracted 41 leading horse and rider partnerships, among them 13 of the world’s top-20-ranked show jumpers, including Swiss world number one and Rolex Testimonee, Steve Guerdat, world number six, Pieter Devos from Belgium, and American Rolex Testimonee, Kent Farrington, currently ranked seventh.

Local course designer, Louis Konickx, set a fair 13-obstacle 1m55 test in the Brabanthallen’s main arena, with 10 combinations eventually progressing to compete in the jump-off. Christian Kukuk from Germany and his grey gelding Checker 47 set the quickest first-round time of 71.29 seconds, and they were joined by riders from six different nations, including two local Dutch riders – Kim Emmen and Marc Houtzager – making it a truly international spectacle and final showdown.

Second to go, it was Emmen and her 12-year-old stallion, Jack van het Dennehof, who set the early pace; however, it was Rio 2016 team bronze medallist, Daniel “Double D” Deusser and his 12-year-old gelding, Casallvano, who ultimately proved too strong for her and the rest of the field, as they breezed around the seven-obstacle jump-off, fault-free in a time of 35.66 seconds to claim the honours.

Thrilled with his victory, the 40-year-old German commented, “Having walked the course, I was quite surprised that there were so many clear rounds. My strategy in the jump-off was to try and win the class. I have to say, all the lines and the turns worked out really well, so I’m absolutely delighted for my horse tonight.

“Casallvano is actually a really scopey horse. He’s a little bit shy when he comes into the ring, but that’s also a positive part of being very careful on the jumps. I have to say that although he’s a very fast horse, I had in the last one or two weeks a couple of turns that didn’t work out like I expected, and I finally came to that point today where everything works out, which makes me very proud.

“Considering the circumstances, it’s not normal that we can do our job at the moment. The organisation here and the sponsors did a great job to make that happen and let us ride again.

“I will ride Scuderia Tobago [Scuderia 1918 Tobago Z] in the Rolex Grand Prix on Sunday. He is in great shape and he had a couple of very good results in Wellington a couple of weeks ago, and I hope to continue in the same shape on Sunday.”