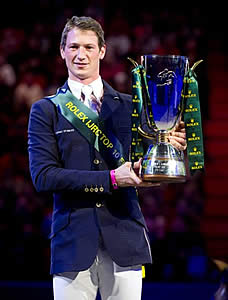 The 2013 Rolex IJRC Top 10 Final did not disappoint the packed crowds in the Globe Arena in Stockholm with some thrilling riding by the world’s top 10 riders. It was Daniel Deusser who gave everything he had riding his bay mare Evita van de Veldbalie with a double clear and a winning time just faster than French rider Patrice Delaveau.

It was a last minute entry by Deusser into the Rolex IJRC Top 10 Final, following the late withdrawal by British rider Scott Brash, and the young German rider did not miss his chance. “My mare has helped me a lot in the second round. She was fantastic; she gave everything and I owe this win to my amazing horse!” said Deusser.

Delaveau was just two tenths of a second behind Deusser, with the only other double clear of the evening.  Ben Maher was the fastest rider of the night, but his four faults in the first round cost him dearly and moved him to third place.  The experienced and ever popular Ludger Beerbaum (GER) was roared on by the crowd to a very fast clear in the final round, but he had to settle for fourth place after his four faults in the first round. Rolex Testimonees Steve Guerdat and Kevin Staut could not make the podium on this occasion, but will be sure to be competing for the title again in 2014.

The results of the 13th Rolex IJRC Top 10 Final: