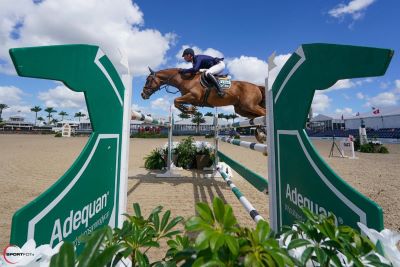 Fifty-seven of the world’s elite show jumping combinations set out to contest Anthony D’Ambrosio’s (USA) first-round track in hopes that they would qualify for the jump-off and subsequently, the $406,000 Lugano Diamonds Grand Prix CSI5* on Saturday, February 26, at 7 p.m. Of the 18 nations represented in the opening field, only 10 combinations from six of those countries landed a spot for the short track. That field then went from 10 to nine returning as Sergio Alvarez Moya (ESP) made the decision to save his jumps for another day.

Ireland’s Shane Sweetnam led off the return field and immediately put out a challenge to the remaining riders as he and Alejandro, owned by Sweet Oak Farm, Spy Coast, and Seabrook, produced another clean round in 38.25 seconds. Always an exciting pair in a jump-off, Deusser and Scuderia 1918 Tobago Z entered third and overthrew Sweetnam by clocking in almost a second faster at 37.42 seconds. Those following put forward their best efforts but as the final horse stopped the clock, it was obvious Deusser and the 14-year-old Zangersheide stallion (Otangelo x Mr Blue) gelding had succeeded.

With blue skies above, it was Ashley Vogel aboard Lucy In The Sky who donned the blue sash with a time of 62.65 seconds in the speed class as the fastest of seven clear rounds.

Already showing success at higher levels, Vogel intends to continue their partnership going forward. “In the last year and a half, I’ve gotten a lot of results on her, some speed classes and things, and now I’m starting to step up into some of the FEI classes and she’s really excelling,” she said. “I believe I’ll be doing some more speeds throughout circuit though, some 1.40m classes, some 1.45m, and hopefully we’ll see some more results and mileage for both of us, so I’m really excited for that.”

The second-place ribbon went to Quentin Judge (USA) riding HH Qualido owned by Double H Farm with a time of 63.01 seconds, and Maria Costa (USA) rounded out the top three on her own Iceman B SFN with a time of 66.58 seconds.