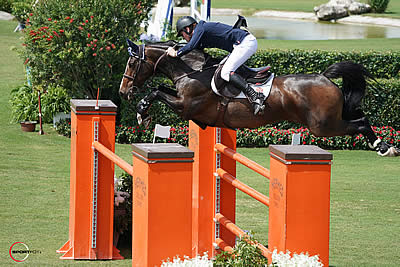 The final day of WEF 11 came to a close with the spotlight shining on the future stars of show jumping. Daniel Coyle (IRL) scored a victory in the $50,000 Hermès Under 25 Grand Prix Final riding CHS Krooze on the stunning grass Derby Field at Equestrian Village on Sunday, March 24.

Coyle guaranteed a six-horse jump-off from the final spot in the opening round and again saved the best for last by going clear in a blistering 39.83 seconds over the short course to bump Belgium’s Zoe Conter into second.

“This is my last year in the Under 25 and I think the series has been incredible for me,” said Coyle, 24, who started competing in the Hermès Under 25 Grand Prix Series four years ago. “Experiencing this format is a real help for when we’re older.”

Coyle got the ride on CHS Krooze, a nine-year-old Irish Sport Horse mare by Kroongraaf, in December after bringing the mount over from Ireland. He noted, “I didn’t expect her to be at this level already and that just proves that the Under 25 is a real good series for the horses as well.”

Kat Fuqua of Atlanta, GA rode her own Brighton to the Rosenbaum PLLC Large Pony Hunter division championship title on Sunday to close out WEF Week 11.

“He was really good,” said Fuqua of the gelding that she notably also rode to the Large Regular Pony Hunter Championship at the 2018 US Equestrian Pony Finals after sweeping all three phases of the national championship event. “On both of my ponies at the same jump, I went for the forward distance, and it wasn’t there. The ponies were right; I was wrong. I’m really happy with them.”