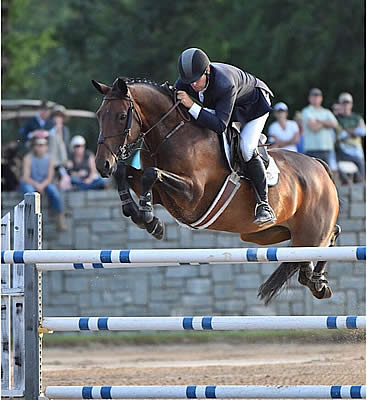 Daniel Geitner wrapped up Week II of the Atlanta Summer Classic with a win in the $25,000 Sidelines Grand Prix, presented by EMO. In the saddle of the game mare Curly Sue, Geitner topped the field and headed home with the winner’s share of the prize.

“Curly Sue is just fantastic,” said the Aiken, South Carolina rider. “She’s an easy horse; she rides super simply. Actually, she requires very little training on my part. I mostly just sit there and stay out of her way.”

This grand prix victory comes on the heels of Geitner’s win in the $7,500 Welcome Classic earlier in the week. Again, he was in the tack of Curly Sue, who is owned by Greg Burrow.

An overcast sky hung over the Olympic Ring at the Georgia International Horse Park in Conyers, Georgia. Seventeen entries came out to compete over the first round. Clear rounds were hard to come by, with only four of the 17 contenders invited back to the ring to battle it out in the jump-off round.

Curly Sue and Geitner were the third to attempt the shortened course, racing to the finish in 38.691 seconds. A fallen rail at the last fence landed the pair four faults, but the duo couldn’t be caught.

“The jump-off is where things got interesting,” Geitner said. “You had to go over the mound to get from Jump 2 to Jump 5, which is always an added challenge. But the time allowed, at 40 seconds, was a little snug.”

Tricia O’Connor, of Williston, Florida, was the runner up. Aboard her own Coolman 78, O’Connor posted a four-fault jump-off round, and raced to the timers just outside of the time allowed in 40.117 seconds. The ended the class with five faults.

Geitner returned to the ring, this time to jump-off aboard the Kenwood Syndicate’s Kenwood. The duo raced to the timers in 36.481 seconds, but sent two rails tumbling for a total of eight faults. They ranked third.

Savannah Unger, of Morriston, Florida, was awarded fourth prize for her performance with her own Fabio TN. The duo left all the jumps solidly in their cups, but were well over the time allowed, finishing in 47.783 seconds with eight time faults.

Wellington, Florida’s Heather Hooker ranked fifth for her four fault first round with Meredith Darst’s Quester de Virton. O’Connor was back in the ribbons, picking up sixth place for her performance with Michael Kirby’s KT Bolo. Chasen Boggio, of Canton, Georgia, ranked seventh for his ride aboard Victoria Press’ Quesada D’Elle.

Penny Brennan, of Loxahatchee, Florida, ended the class in eighth place with her own Vertigo Delorme, and ninth was awarded to Williston, Florida’s Michael Kirby, who was riding Fairly Stable LLC’s Play Boy. Ranking tenth was Boggio, this time aboard his own Co-Pilot. Nicki Mathen, of Austin, Texas, was eleventh with CopperhillSportHorseSales.com’s Felix BC. Kirby rounded out the Top 12 placings for his ride with his own Disaronno.

Week II of the Atlanta Summer Classic kicked off in a major way for Daniel Geitner, who galloped his way into the winner’s circle aboard Greg Burrow’s Curly Sue in the $7,500 Welcome Classic.

Geitner, of Aiken, South Carolina, topped a field of 16 entries in the Wednesday feature jumper class, held in the Olympic Ring at the beautiful Georgia International Horse Park in Conyers, Georgia. Of those, eight contenders progressed to the jump-off.

It wasn’t a bad day at work for Geitner and Curly Sue, who haven’t been in the show ring since winning a grand prix in Aiken, South Carolina in April.

“The rideability of this mare is great; she’s as steady as they come,” Geitner said of the nine-year-old mare. “I haven’t jumped or schooled her over fences since Aiken in April, so the Welcome was a test to see where she was and if she is up for the grand prix later in the week — she is.”

The pair headed into the ring early in the jump-off order, setting the pace to beat right off the hop. They swiftly navigated the second round, reaching the timers in a clear and quick 41.502 seconds.

“I’ve been coming to Conyers to show here for what seems like forever,” Geitner said. “The work the Classic Company team is putting in here is evident — especially in terms of the footing. Hopefully things just keep improving.”

Hot on the heels of the winners was runner up Michael Kirby, of Williston, Florida. Aboard his own Disaronno, Kirby rode to a double clear performance in a time of 43.288 seconds.

Returning to the ring with his second mount, the Kenwood Syndicate’s Kenwood, Geitner piloted to the finish timers in 43.398 seconds. The duo left all the jumps solidly in their cups and took home the prize for third place.

Tricia O’Connor, of Williston, Florida, ranked fourth for her four-fault jump-off ride aboard Michael Kirby’s KT Bolo. They reached the timers in 44.395 seconds. Fifth place was awarded to Mary Meghann Huitt, of Savannah, Georgia. Riding her own horse, The Stig, Huitt sent a rail tumbling at Jump 3, before racing to the finish in 45.079 seconds. Savannah Unger, of Morriston, Florida, finished the class in sixth position for her eight-fault jump-off round on her own Fabio TN. Seventh place was awarded to J. F. Gagne, of Columbus, South Carolina, who rode Tower Lux to an eight-fault second round. Nicki Mathen, of Austin, Texas, ranked eighth for her 12-fault jump-off ride with Molly Lacey’s Braveheart CH.

Ninth place was awarded to Heather Steinman, of Canton, Georgia, who was in the saddle of Livhaven Stables’ Corini. Rounding out the top 10 placings was Dana Noga, of Ocala, Florida, who was riding her own OBOS Pepperpot.