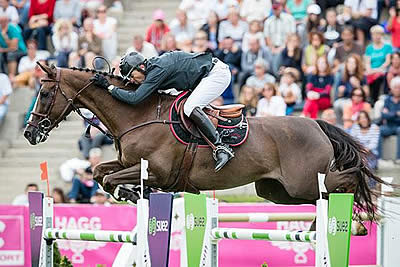 USA on the lead

The Conseil départemental of Ille et Vilaine was the sponsor of the first speed class of the day (145cm), with about 30 riders on the list. USA clinches victory, but the rider from Brittany, Margaux Rocuet, placed 2nd.

11 out of the pairs on the start list clear the course, but the fastest, in 69’’10, is the American rider Catherine Nicole Tyree, 23 years old, riding her 11 year old grey gelding, Bokai. « He is one of my three horses. I have been riding him for just a year; he is very careful, and brave. He does everything he can to win. »

With a time of 69’’58, riding Vahiné de Biéville, the rider from Brittany, Margaux Rocuet, who was in the lead for a long time, had to do with second position. The 24 year old rider based in the family stables of Saint Helen, with her father Bruno, had a large smile on her face after this great result in her first show at this level in France. Despite a broken toe, Margaux paid tribute to the mare she has been riding for two years, and owned by Edouard de Rotschild. « I always believed she would be successful. We did everything we could to educate her properly and bring her at this level. For me Dinard is a mythical site; we have been coming here every year since I was little. I did everything I could to be selected for this show. I am very happy about this result. »

The 3rd place goes to Patrice Delaveau (FRA), associated to Urcos de Kerglenn (Toulon), who brings the horse breeding from Brittany into the highlights, for the greatest delight of the Richard family, based in Finistère.

The second class of the day (155cm) reserved to the riders of the 5* was also against the clock. Victory goes to Patrice Delaveau (FRA), followed by Thierry Rozier (FRA).

If one third of the riders clear the course, the French rider, World reserve champion in 2014, Patrice Delaveau, signed the fastest time (74’’83) and clinched victory with his experienced Aquila HDC. « I am very happy; my horse jumped super, and he liked the course. He is used to compete in CSI5* every week end. He just completed a difficult tour; he is relieved to be back on a large grass arena. He had a good time, and me too. »
The surprise of the day comes from the second place of Thierry Rozier, who, after fifteen years away from this level of competition, completes the course in a time of 75’’76 with his student Electra Narchios’s mare, Venezia d’Ecaussinnes. « I am really happy, super motivated by the whole atmosphere, my brother Philippe’s career. I feel like crazy at the moment. I am really keen about competing. Actually I am impressed myself by this result, especially with this mare who was competing in the amateur classes last year. Since the beginning of the season, I did everything possible to be selected for this show in Dinard. I asked Philippe Guerdat to put me on the list if he could; he said he would select me because of my results. »
The third place goes to the Portuguese Luciana Diniz, associated to Lennox, one of her top horses she will ride in the Rolex Grand Prix – an auspicious result.

All the start lists and results: www.worldsporttiming.com