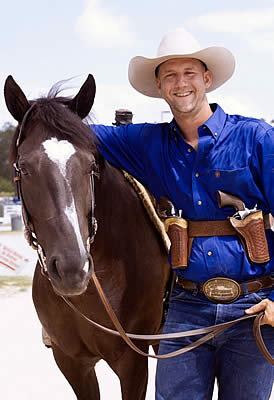 Jacksonville, FL (May 26, 2017) – The Jacksonville Equestrian Center was packed with both people and horses for the facility’s first-ever Free Family Fun Day and the return of the Extreme Mustang Makeover competition. Saturday, May 20, saw a crowd of approximately 200 gathered to enjoy the wild mustangs, a bounce house, face painting, balloon animals, a vintage mustang car show, pony rides, a petting zoo, Gator Country 99.9 FM’s live radio show with prizes, and the nearby Olympic-sized swimming pool. The evening brought another crowd to the Jacksonville, Florida recreational facility for the popular Extreme Mustang Makeover Top Ten Freestyle Finale show.

The Extreme Mustang Makeover is a unique competitive event produced by the non-profit organization Mustang Heritage Foundation. Trainers are given 100 days to turn an American Mustang from wild to mild. The Jacksonville Equestrian Center’s beautiful facility was the perfect venue for trainers to compete for cash and prizes while displaying the trainability of American Mustangs in hopes of finding a suitable adopter for each Mustang entered. During the Top Ten Freestyle Finale, the trainer and Mustang pairs who scored highest in the weekend’s competition so far put it all on the line for the grand prize. Spectators cheered them on as they performed everything from standing in the saddle to mounted shooting to jumping obstacles.

Many of the Mustang trainers felt that the experience changed them just as much as it changed the Mustangs. “It made me start from scratch,” stated Ashley Mancuso, a trainer from Tallahassee, Florida. “I had to think about the communication I was giving to the horse because these Mustangs come to us never being touched before. So, everything they become is really what we are.”

This year’s Extreme Mustang Makeover champion, and winner of the $25,000 prize, was trainer Marsha Hartford-Sapp, who competed for her 8th consecutive year in this challenging event. She also won the champion title last year at the Jacksonville Equestrian Center. “The learning process that I get from every horse motivates me,” she explained. “For me to have an avenue where I can learn so much as a trainer, and make myself better as a trainer, and help a horse at the same time, is really a phenomenal opportunity.”

Hartford-Sapp won this year with the mare Chason Dreams. “I am so proud of this exceptional mare, who was nothing short of remarkable the whole weekend! She made my heart swell in the freestyle with how brave she was in the crowds and noise, and how much she tried for me.” Hartford-Sapp went on to say that Chason Dreams won another big prize by being adopted by her new owner, Cynthia Smoot, at the auction held directly after the Top Ten Freestyle Finals. “Cynthia was able to meet Dream on Friday before the competition, and their energy together was fabulous! I am so excited for the partnership, and I am beyond honored to be asked to continue training Dream for her new owner.” Hartford-Sapp is the owner and head trainer at Southern Oaks Equestrian Center in Tallahassee.

The Jacksonville Equestrian Center was thrilled to host the Extreme Mustang Makeover to help bring awareness to the public about wild Mustangs and Mustang adoption. This year, even more people in the local community had a chance to meet the Mustangs as part of the Free Family Fun Day that the facility held in conjunction with the event.

Many Family Fun Day attendees enjoyed the chance to meet a different kind of Mustang, as the Jacksonville Mustang Car Club brought a bright array of unique Mustang vehicles to the grounds. Kids spent the day riding ponies, petting farm animals, jumping in a bounce house, and getting their faces painted. Lucky families went home with prizes distributed by Gator Country 99.9 FM, including buy-one-get-one-free horseback riding coupons for the nearby Diamond D ranch, concert tickets, and tickets to the Extreme Mustang Makeover Top Ten Freestyle Final.

For more information and to find out about other exciting upcoming events, visit www.jaxequestriancenter.com or call (904)-255-4215.