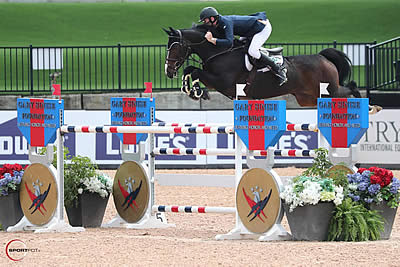 A field of 76 entries competing over the Michel Vaillancourt (CAN) course design and 21 pairs qualifying for the jump-off made for stiff competition, causing six pairs to withdraw in advance of the second round. Coyle’s strategy was to go as fast as possible as the first rider to test the short course with his own 2010 Irish Sport Horse mare (Kroongraaf x Cruise Oak):

“There were still a good few clears for the jump-off, and I was first. So, I had to be as fast as possible. Luckily, that horse is incredibly fast! I think sometimes it’s better to go first in a jump-off, because you just stick to your plan and everybody else has to try and beat you,” Coyle posited. “Sometimes it works out better!”

Tryon Fall 4 is Coyle’s first experience as a competitor at TIEC, and dominated his first FEI class at the venue by more than three seconds. Similarly, Coyle is testing the waters with his nine-year-old emerging star, as well as her abilities, he said.

“She’s been incredibly competitive all year anyway. In the beginning of the year, I didn’t know what was her class, or where she belonged, so to speak, but every time I ask her to jump a little bigger, and ask a little more, she keeps giving it to me,” he shared. “I’m going to keep going with her until the time that she says, ‘okay, maybe this is too much for me!’ But right now, I haven’t felt that yet.

“She’s still only nine, and winning 1.50m classes, so I have to be careful and make sure that I don’t ask her too much too soon,” Coyle emphasized. With this in mind, Coyle explained that he is selecting Farrel, the 2010 Dutch Warmblood gelding (Cardento 933 x Becherry) owned by Ariel Grange, to challenge Saturday’s $134,000 Gary Sinise Foundation Jump for Our Heroes Grand Prix CSI 3* presented by Lowe’s. He’ll save CHS Krooze for another 2* week or another venue entirely.

A lengthy entry list meant that CHS Krooze got to take an hour break in her stall between rounds, Coyle relayed, which helped to keep her mentally and physically fresh:

“I sent her back to the barn and she got to cool down and take an hour in the stall. I had Farrel to jump in the meantime. Everything worked out great that I got to keep going and keep myself active by jumping another horse, and then by that point it was time to get going for the jump-off.

“I think it’s always better for the horse to be able to have an hour off and come back between rounds, especially at a show such as this where everything is convenient,” Coyle noted. “Why not give the horse an hour break? Okay, adrenaline keeps them going at the time [if there’s no break], but it always makes it easier if they can have a little down time away from everything, and it freshens them up a little bit for the second round.

“This is my first time here, so it’s cool to win the first FEI class here,” concluded Coyle. “We are staying in a log cabin here onsite, and that’s really convenient and handy. We have lots of horses here, so it’s better if you’re closer.”

Howard and the 2008 Dutch Warmblood mare (Cavalier x Concorde) owned by Laure Sudreau-Rippe and Peter competed against 54 other horse-and-rider pairs over the Michel Vaillancourt-set course, but Howard admitted that her plan was simply “just to let her [Donna Speciale] go at her own pace today.” She continued, “Donna is a very fast horse; she’s won, I think, four Grands Prix this year. She’s naturally fast over the ground, so it worked out.”