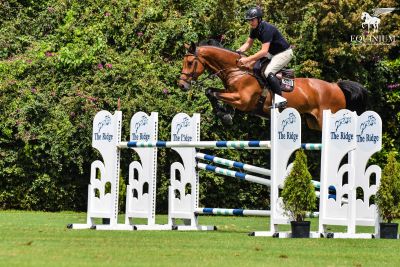 Wellington, FL (March 21, 2021) – Two Irish cousins made impressive work of Friday’s $15,000 1.40m Turf Tour Grand Prix jump-off, executing a number of tight rollback turns and angled jumps in an attempt to get through the timers before the clock read 30 seconds. Jordan Coyle and Centriko Volo were the ultimate winners, delivering in 29.587 seconds. His cousin from the Emerald Isle, Daniel Coyle, was hot on his heels aboard Lisaniska Cool Quality, finishing on 30.315. As the final event of the year set on Black Watch’s beautiful grass field, Turf Tour 11’s St. Patrick’s week proved to be a fantastic event for show jumpers of all levels.

Black Watch’s Grand Prix course on Friday included a triple bar, blue arched wall, oxer to skinny combination, triple combination, and a few bending lines and rollbacks that encouraged riders to turn quick and shave off seconds at the risk of dropping rails. The jump-off was similar, with the triple bar to oxer line to start, followed by a roll back to the prestige vertical, long gallops to another few oxer vertical combinations, and a final roll back and gallop to the final vertical. The first double clear by Alex Granato and Disco Superfly ended at 32.986, Jordan Coyle’s 29.587 second jump-off was hotly contested, with his cousin Daniel, Ashlee Bond, Mark Reid, Chloe Reid, Kim Farlinger, and Wednesday’s Rising Star winner, Kayla Savard, all attempting to catch him. However, Jordan’s time prevailed, and as a long-time rider on the Turf Tour, he regularly brings multiple horses to show and train at The Ridge’s various beautiful weekly venues.