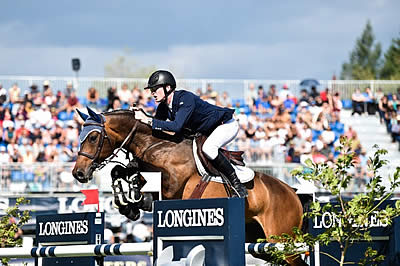 Coyle revealed a rising star in the 9-year-old Farrel, who produced two electrifying clear rounds in the first of 14 legs in the 2019/2020 North American League season. Kelli Cruciotti (USA) finished second as the only other double-clear performer on the day, while Harrie Smolders (NED) was third aboard Hocus Pocus de Muze.

“I think, give him another year’s time, and he will be a real, real top horse — not that he isn’t right now, but he’s still a little green. This was a real track today, and he proved himself to be a horse for the future.” — Daniel Coyle (IRL)

Just five combinations were able to clear Peter Holmes (CAN)’s first round course without fault, and they all came from the class’s final eight riders. Richard Spooner (USA) was the first to crack the code, and Coyle, Smolders, Beezie Madden (USA), and Cruciotti followed.

In the jump-off, Coyle was the first to produce a second clear, and no one could catch him. He finished the shortened course in 37.32 seconds. Cruciotti, riding her mount from the 2019 Longines FEI Jumping World Cup™ Final in Gothenburg (SWE), finished in 42.26 seconds, while Smolders finished with a 4-fault score in 37.41 seconds.

“In the jump off, usually he jumps better, which is strange, but when you start galloping, he starts to look a little quicker and jump a little higher,” Coyle said. “I know that from the last few years that I’ve had him. That third jump did come down a lot, and I really rode him at it, and he jumped it probably as good as he could that second time. When you know them a little more, it’s a lot easier, especially when they’re younger jumping this level.”

The victory moved Coyle to the top of the east coast sub league standings of the North American League with 20 points, while Cruciotti took over an early lead in the west coast standings with 17 points.

The North American League continues in New York on 15 September 2019.