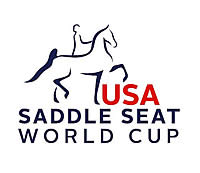 Lexington, Ky. – For the past few weeks, votes have been cast at www.USEFNetwork.com for ten Saddle Seat World Cup Video Contest finalists. The votes, cast by the general public, have now been tallied and Courtney Ball of Scottsdale, Ariz. has won the Grand Prize.

The contest began with more than 40 videos submitted by saddle seat riders from all across the United States. The videos had to be less than one minute long and answer the question: “What would it mean to you to be on a Saddle Seat World Cup team?” From those first submissions, a panel of judges selected ten of the videos as finalists and let the public determine the winner.

Ball’s answer to the question proved to be the favorite among the voters. Sentiments like, “World Cup means you don’t need a top horse to compete with the best around the world. In the end, it is your skill that prevails,” and, “Every time you put your foot in the stirrup you have the chance to learn something new,” were resonant and have earned Ball a saddle from Freedman’s Harness and Saddlery as a Grand Prize. Ball will also be recognized at the 2014 Saddle Seat World Cup held July 22-25, 2014, in Asheville, N.C.

Earning the second-place prize was the video made by Karsan Taylor from Kensington, N.H. Karsan will receive a Kensington Canvas and Leather Collection roller and overnight bag for her effort.

“To me the World Cup is not only a prestigious team, it is a chance for the Saddle Seat riders to show our true talent and discipline,” says Taylor in the video.

Shaunicy Sturm of Las Vegas, Nev. finished third and will receive a Freedman’s Harness and Saddlery belt, along with a Saddle Seat World Cup jacket and polo as prizes.

Sturm won over voters with feelings like, “Riding had always been a team sport for me. It would mean more than the world to me to be part of just one more team – the World Cup team.”

Learn more about the 2014 Saddle Seat World Cup at www.usasaddleseatworldcup.org.