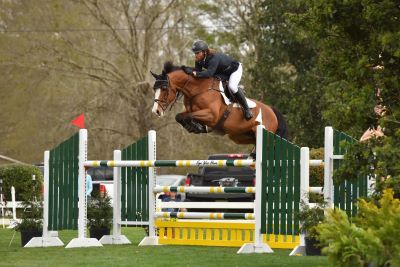 Colby Coltrain of Argyle, Texas rode Gianna Aycock’s Conquer to the winner’s circle after besting a field of twenty-one horse and rider teams. While the pair has done fewer than ten Grand Prix ranging from 1.25m to 1.35 to a few 1.40m, this was the first Grand Prix win for both Coltrain and Conquer.

Of the twenty-one horse and rider teams, only nine advanced to a second-round opportunity with a jump off round time allowed set at 48 seconds.

The first up was Katey Kozeny of Tempe, Arizona and her own Isolde De Wacht. The pair had eight jump faults in a time of 41.178 seconds and would finish in sixth place overall.

Christian Rogge of Cypress, Texas in the irons of Avequest, LLC’s Cashmere 33 followed Kozeny and posted a clear jump off round in a time of 39.59 seconds, taking the lead.

That lead was short lived when Holly Shepherd of Grand Bay, Alabama and Loretta Patterson’s War Machine took to the Grand Prix field, posting a clear round in a time of 39.028 seconds.

Darby Pease of Danville, Kentucky aboard Hillary Gromus’ Cumbaya W followed Shepherd and War Machine, taking the lead with their clear round in a time of 38.752 seconds.

Coltrain commented, “Darby went before me in the jump off and she was really slick from 14 to 1 to 6 and she did the 7 really nice and she didn’t even go that wide to number 10, but when she landed after 11, she was a little slow and didn’t gallop away. That fence was where we had to make the right turn and step up our time,” he added.

That was the move that moved Coltrain to the lead. Coltrain and Conquer turned in the winning round in the jump off posting a clear round in a time of 37.168 seconds, moving Pease and Cumbaya W into second place, War Machine and Shepherd into third, and Rogge and Cashmere 33 into fourth.

Shepherd and Loretta Patterson’s HJ Hercules were the last horse and rider team to tackle the jump off course. Their fault free time in 44.206 seconds saw them finish in fifth overall.

Coltrain said, “Conquer is a horse that we got as a late 4-year-old, early 5-year-old. He’s 9 now and he’s come a long way in 4 or 5 years. We got him from Jamie Gornall. He was in Wellington as a sales prospect and being marketed as a hunter and well; he was just wild. Gianna [Aycock] was in Wellington at that time and she ended up buying him down there as well as his half-brother as sales prospects. But we ended up keeping Conquer.

“People said they didn’t think he was a good jumper. He was fussy with his head, and he didn’t have a lead change, and no one really wanted him. I remember there being a lot of days where we would wonder if he was good enough. But he is really brave and wants to go to the other side of the jumps, so we just kept going with him.

“It wasn’t that long ago that my rounds didn’t look very good. We were having trouble getting around a 1.25 m course. Just 2 years ago he was belly flopping 1.10m oxers. He has come a long way in a short period of time, but we’ve done it really slowly. Anytime he seemed like he was uncomfortable we’d back him down again until he got his confidence. The more I have been able to let him be himself, the more he has flourished,” said Coltrain.

“Gianna and I used to say that Conquer had a right rein deficiency and the funny thing is there were a lot of right turns today and he did great.

“We’ve done all three Grand Prix here in Gulfport and will be here for the entire circuit,” he said. “The coolest thing in the world is riding in the Grand Prix for free. If we have 5 horses of our own at the show and we have to pay for these fees, that puts a lot of pressure on us. If we do the Welcome, then the Grand Prix entry fee is waived and it’s nice to ride onto the Grand Prix field and know that the jumps don’t own us. The level of anxiety that is removed is amazing. We’re having fun because we literally are out there to see how the cards fall and see how it turns out with such less pressure,” he said.