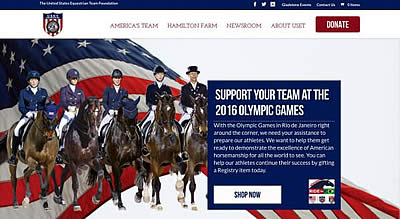 Gladstone, N.J. – Aug. 4, 2016 – The Olympic Games in Rio de Janeiro, Brazil kick off on Friday, and the United States Equestrian Team (USET) Foundation is pleased to offer a space dedicated solely to the Olympics and the U.S. Olympic equestrian team on its website www.uset.org.

Under the “Newsroom” tab, users may click on “Olympic Games” in the dropdown menu to access U.S. equestrian team member bios, press releases and updates regarding the Games, a complete schedule for Olympic equestrian events, live streaming and a blog from USEF Director of Sport Will Connell. The page provides U.S. equestrian fans with a comprehensive guide to the 2016 Olympic Games all conveniently located in one place!

The USET Foundation is a vital part of equestrian sport in the United States. For more than 65 years, equestrian athletes have represented the United States in international competition, bringing home medals that have clearly established the United States as among the world’s equestrian elite. However, dedication, hard work and dreams alone do not bring home medals. The costs of fielding international teams are enormous. Training, coaching and transporting of human and equine athletes around the world in order to compete against the sport’s best athletes is a daunting undertaking, requiring a huge commitment of time and money.

Be a part of history and show your support of the 2016 U.S. Olympic and Paralympic equestrian teams by donating to the USET Foundation during the 2016 Olympic Games! Your contributions will help our athletes bring home medals and demonstrate the excellence of American horsemanship for the entire world to see.