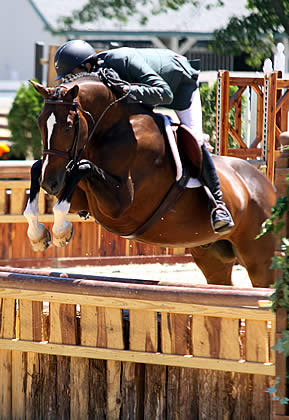 Today’s $5,000 Hallway Feeds USHJA National Hunter Derby was the fourth event in the seven-part Hallway Feeds Series. The series runs throughout both the Kentucky Spring and Kentucky Summer Horse Shows, culminating with the awarding of $15,000 in Leading Rider Awards at the Kentucky Hunter Jumper Association Horse Show on August 25, 2013.

The popular series attracts horses and riders from across the country, and today 39 horses competed over the classic first round course, designed by Joseph Carnicom with the top 12 horse and rider combinations returning for the handy round. Both rounds featured an in-and-out, a number of bending lines, tight turns and four high-point fence options. For the handy round, Carnicom added a trot jump and switched the direction from which riders took all of the oxers, allowing for some additional tight turn options.

Syquia and Apropos, owned by Chiddingstone Farms LLC of New York, NY, maneuvered the first round course with ease, earning a judges score of 86, plus four points for electing to take each of the high options for a first round total score of 90. Syquia was one of the last to go over the first round course and jumped straight to the top of the leader board, but just two rounds later Meredith Darst and Lightning Z took over the top position with a first round total score of 91. After their beautiful first round course, including each of the four high options, she and Lightning Z, owned by Lochmoor Stables of Lebanon, OH, would hold their position to return for the handy round as the leaders.

Working backward from the twelfth placed rider to Darst in the first place position, Shawn Casady and Stars Go Blue, owned by Marigot Bay Farm LLC of Dover, MA, were the seventh to return, as they finished the first round in the sixth place position with a score of 86. A second round score from the judges of 85 plus all four of the high option points would earn them a total second round score 89, moving them up from sixth to a final fourth place position with a grand total score of 178.

Returning in fourth place were Molly Sewell and Zin Zin, owned by Travis Lingenfelter of Saginaw, MI. They too were able to work their way slightly up the leader board, moving from fourth into the final third place slot by earning a second round total score of 90 and a grand total of 178 points.

Coming down to the final two riders of the afternoon, Syquia returned second to last, just before Darst. He and the 10-year-old Belgian Warmblood, Apropos, pulled out all the stops, delivering a round that would be tough to beat with a total score of 92 and with his grand total from the two rounds coming in at 182.

“I was in second by one point going back into the handy round, so I figured I was really going to take a shot and turn as tight as I could and keep galloping,” shared Syquia.

Darst and Lightning Z returned to defend their position at the top, and they delivered a seamless round that definitely gave Syquia and Apropos a run for their money. Following a brief deliberation from the judges, Darst’s second round score was announced as an 86 plus the four point high options for a second round total of 90 and grand total of 181, just one point behind Syquia, cementing her second place finish and his win.

“We went quick and tight to the last jump, and I think that probably was the difference for us. That and a real tight roll-back to the oxer. Apropos really a traditional hunter. You just put a loop in the reins, use a little bit of leg and just keep pushing him right up to the jumps. He loves to get deep, and he really uses his front end well when he gets down to the base,” Syquia explained. “He was great; I was really happy with him.”

Darst was also extremely happy with her horse’s performance, particularly because today marked Lightning Z’s first time ever competing in a derby.

“This is the first time that he’s done anything like this before so we were just kind of going for fun, and it ended up going really well,” smiled Darst.

Both riders hope to return for next week’s $5,000 Hallway Feeds USHJA National Hunter Derby as competition continues on Tuesday, July 30 with the start of the Kentucky Summer Classic, running through August 4. To learn more about the Kentucky Summer Series, visit www.kentuckyhorseshows.com.