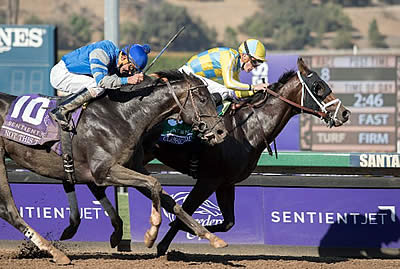 Classic Empire is set to begin his Classic campaign this year in the Kentucky Derby, where he is the bookmakers’ favourite to prevail in the 2000m contest at Churchill Downs in Louisville, Kentucky.

The Mark Casse-trained horse was one of the most impressive two-year-colts last year in the United States where he won on three of his four starts at the racecourse, including the Grade One Clairborne Breeders’ Futurity Stakes at Keeneland and the Breeders’ Cup Juvenile at Santa Anita during the World Championship meeting in November.

Classic Empire has already had the benefit of two starts in 2017. He made his seasonal reappearance at Gulfstream Park where he could only come home third in the Grade Two Lambholm South Holy Bull Stakes when going off at -200. He did though come on for that outing on his most recent run at Churchill Downs when he won the Grade Three Bashford Manor Stakes.

Last year’s Breeders’ Cup Juvenile winner is a best price of +700 for victory in the first leg of the Triple Crown; however, if you are looking to back Casse’s talented horse, check out comparison sites like BritishBookmakers.co.uk who collate the best sign-up offers and odds for the meeting at Churchill Downs next month.

Always Dreaming is unbeaten since moving to Todd Pletcher’s yard and is also set to line up in the Kentucky Derby for his connections. The three-year-old ran only once last season, where he finished third at Belmont Park. He’s already had two outings in 2017 as he scored on his return at Gulfstream Park, where he stepped up to 1800m for the first time in his career.

Pletcher’s colt made a quick return at Gulfstream Park to land the Grade One Florida Derby by an impressive five lengths. He was ridden that day by John Velazquez, who tracked the leaders early on and made a challenge in the home straight where his horse picked up really well.

Always Dreaming is available at +800 in the latest betting, at the time of writing. Pletcher is bidding for his second Kentucky Derby winner as he trained Super Saver to success in 2010.

Another horse who is expected to be in contention at Churchill Downs is Irish War Cry for H. Graham Motion, who last won this race in 2011 with Animal Kingdom. The horse, whose sire is Curlin, has already recorded a couple of Grade Two successes.

After making his a winning debut Laurel Park, Motion’s colt went straight into the Lambholm South Holy Bull Stakes where he upset the short-price favourite Classic Empire. A month later he ran a below-par performance as he came home down the field at the same course in another Grade Two contest.

Irish War Cry looked right back to his best earlier this month in the Wood Memorial Stakes at Aqueduct as he finished the strongest of the eight runners to claim success with Rajov Maragh on his back.

This year’s Kentucky Derby will be the 143rd renewal of the race and will take place on May 6 where there are currently 23 entries remaining with just two weeks to go.