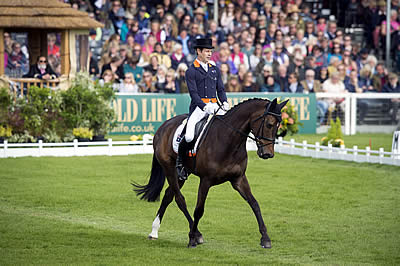 Australia’s Christopher Burton produced a typically elegant display to lead the dressage phase at the 4* Mitsubishi Motors Badminton Horse Trials, fourth leg of the FEI Classics™, with the outstanding mark of 32.9 on the 12-year-old Irish Sport Horse Graf Liberty.

The only riders to have bettered Burton’s score in Badminton’s 68-year history are fellow Aussie Andrew Hoy with Darien Powers in 2000 and Britain’s Pippa Funnell on Supreme Rock in 2002.

“I’m so proud of my horse. I can’t believe it. I deliberately didn’t push him too much at the start of the week – I didn’t even get on the horse until Wednesday afternoon – as I have been known to overdo it on him before, but he worked in better and better and to come out of the arena with a 32.9 is fantastic. I’m so happy.” — Christopher Burton (AUS)

“There was so much atmosphere but as soon as we went into the arena, he felt safe. He is such a sweet horse. I’m looking forward to the cross-country – it’s a mix of big bold fences and accuracy tests and you have to concentrate, but I have ridden some difficult courses in my time and I feel my horse is in good shape.” — Ingrid Klimke (GER)

Irishman Jonty Evans, back at Badminton for the first time in 10 years, broke down in tears on hearing his mark of 37.2, which puts him in third place, and pointed emphatically to Cooley Rorkes Drift, the horse that took him to ninth place at the Rio Olympics last year. The last Irish rider to win Badminton was Eddie Boylan (Durlas Eile) in 1965 and the last top-three finisher was Jessica Harrington, who was third with Amoy in 1983.

“He is my horse of a lifetime. We have trained so hard and I’ve wanted to get under 40 for so long. It’s unbelievable, very special. I’d like to think the cross country will suit my horse – he doesn’t look big because I’m so lanky, but he’s got a long stride. Finishing on my dressage score is the aim!” — Jonty Evans (IRL)

Riders are looking forward to the cross country course, variously described as ‘massive’, ‘imposing’ and ‘needing total concentration’ with a mix of excitement and trepidation. Britain’s Izzy Taylor sums it up: ‘Eric [Winter, designer] has handed the responsibility to the rider, which is the right direction. I think we’ll be looking at some different results tomorrow.”