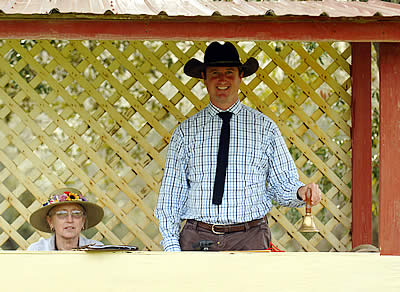 As a senior official, Weber is eligible to preside over USEF juries and ADS competitions. The ‘large R’ status allows Weber to pursue FEI judge status next.

In explaining why the internationally acclaimed combined driver wanted to further pursue a judge’s card, Weber said, “Giving back to the sport that has afforded me so many opportunities. Moreover, there is no sense in complaining about others officiating unless you are willing, by walking in their shoes, to have a clear understanding of their roles and responsibilities. I also believe it makes me a better competitor.”

At the 2014 USEF Annual Meeting in January at the Hyatt Regency in Lexington, KY, Weber’s contributions to his sport and equestrian community were recognized including a televised celebration during evening ceremonies that saw Weber saluted by his peers as one of America’s Equestrians of Honor for 2013.

Weber was named an Equestrian of Honor and candidate for the USEF Pegasus Awards Equestrian of the Year title after recognition by the USEF with its 2013 Becky Grand Hart Award for international success in a non-Olympic discipline. The nomination stemmed from Team Weber’s exceptional performances in the international arena and the horseman’s personal dedication to community service and improving the equestrian industry.

Weber was also appointed to the 2014 USEF Board of Directors, following its streamlining from 54 to 19 members in accordance with amendments – to create a more agile and efficient organization — to the Federation’s governance structure at the USEF Mid-Year Meeting.

“I was humbled to have been nominated as an Equestrian of Honor and to be appointed to serve on the Federation’s Board of Directors. It’s a new year and a new chapter, and I am ready,” says the new R judge.

Follow Team Weber and Clark on their road to the 2014 World Equestrian Games in Normandy at www.chesterweber.com and via Facebook.