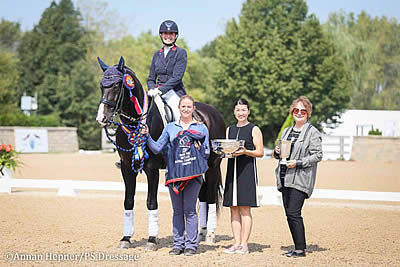 Wayne, Ill. – Aug. 26, 2018 – Competition at the U.S. Dressage Festival of Champions, the USEF/Markel Young and Developing Horse Championships, and the USEF Dressage Seat Medal Finals at the Lamplight Equestrian Center concluded on Sunday, crowning champions in each of the day’s five divisions.

Competitors in the USEF Grand Prix Dressage National Championship returned to the ring for the Grand Prix Freestyle to ride for the championship title. Following a strong freestyle performance, it was Charlotte Jorst and her own Kastel’s Nintendo who held onto their lead and took home the overall victory.

“I thought my freestyle went great. I had such a good time; it was the first time I’ve ridden to my new music and it worked out really well. It feels incredible!” – Charlotte Jorst

“This is my first time here [at the Markel/USEF Developing Horse National Championships] and it’s been amazing. I’m very happy with my horse today. I think it was a good group of people and there was a lot of really fun horses to watch. It was a really great experience; the facility is beautiful as well.” – Dawn White-O’Connor

In the Markel/USEF Young Horse 6-Year-Old Dressage National Championship, Craig Stanley and Habanero CWS (Idocus-Caliente DG, OO Seven) maintained their top position in the division to take home the win with an overall score of 8.98.

“It’s very surreal to think that I would even have the chance to have a horse good enough to achieve this. I have a picture of [Habanero CWS] as an embryo and I actually pulled him out of the mare myself so it’s been a long journey. It’s exceeded all of my expectations.” – Craig Stanley

From competing as the youngest member of the U.S. Vaulting Team at the World Equestrian Games in Normandy to winning a national dressage title, Miki Yang’s had quite a successful week in the USEF Children Dressage National Championship.

“I feel really proud and grateful for everybody that helped me get here, especially my mom [Akiko Yamazaki] for supporting me. It was so fun to be able to compete with her her; it was like a dream come true.” – Miki Yang

Youth riders battled it out in the arena for the title of national champion in the USEF Dressage Seat Medal Final 14-18 Championship. Following the competitive class, it was Sophia Schults of St. Joseph, Michigan riding Samour M who took home the gold medal and was named the new national champion.

“For me, it’s a huge honor to be here. I’m grateful. It’s the second time I’ve been able to do this competition and it turned out super well this year. To help prepare I have taken a lot of lunge lessons. I feel like those have really benefited how I sit and how I’m able to control the horse without just using my hands and my legs.” – Sophia Schults