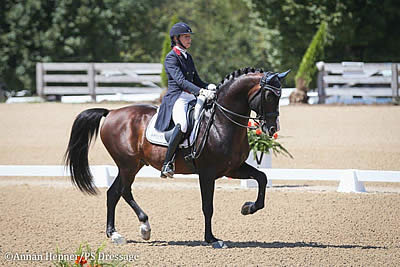 Wayne, Ill. – Aug. 23, 2018 – Competition at the U.S. Dressage Festival of Champions and the USEF/Markel Young and Developing Horse Championships at Lamplight Equestrian Center continued on Thursday with winners named in each of the day’s seven divisions.

“Nintendo has just had three months off so he is very fresh and he was really excited to be back in the ring. I think my piaffe and passage were really balanced and nice. Because he was a little fresher than usual, I had some mistakes but overall, he was on fire. We had a lot of fun and it was a great day.” –Charlotte Jorst

The USEF Young Adult ‘Brentina Cup’ Dressage National Championship, presented by Dressage Today, had riders return to compete in their second class, the Grand Prix 16-25 Test. After a morning of tough competition, Codi Harrison and her own Katholt’s Bossco maintained their lead from Wednesday to walk away with the top score of 72.744 percent. In the Pony Rider Team Test for the USEF Pony Rider Dressage National Championship, Ellanor Boehning and Kabam took first place with a score of 71.524 percent.

“I was so proud of him today and yesterday. I’m really happy with the overall feeling. He’s such a good boy. I hope he can continue this for Saturday. Today, the last piaffe took a little bit to get into it, but it was such a good feeling once I had it on the centerline.” –Codi Harrison

In the USEF 4-Year-Old Test, it was Miles riding Sole Mio, owned by Leslie Waterman, who impressed the judges to secure the victory with a total score of 8.42. Tarjan and Fairouz took the lead in the USEF 5-Year-Old Preliminary Test with a total score of 8.78, while Ots on Max Ots’ Lucky Strike won the Prix St. Georges for the Markel/USEF Developing Horse Prix St. Georges Dressage National Championship with a 72.794 percent.

“I was super happy with him today. The trot work is usually his highlight and it definitely was today too. I think the judges liked how supple and fluid he can be. It’s super because he had enough energy going around but he was relaxed and focused on me so I was really proud of him.” – Emily Miles