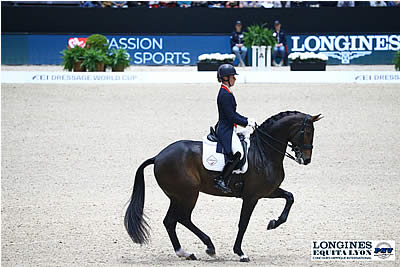 British rider Charlotte Dujardin was the fourth rider to enter the dressage arena for the FEI Dressage World Cup Grand Prix presented by CREARA, and she managed to put in a great performance to hold off the competition. Taking first place in the provisional ranking with 79.978%, she held on to her lead throughout the class, even finishing ahead of Isabell Werth, who scored 77.826%.

This result in Lyon represented a major comeback for the English star. Indeed, she had not competed in Lyon since 2014, riding her famous Valegro. Charlotte Dujardin introduced the ten-year-old Mount St John Freestyle to the judges. It was a first for her horse, which was participating in its first FEI World Cup class. “I’m so happy. This was Mount’s first indoor World Cup class. She is really courageous and has worked a lot for this event. I felt great and I think it was one of the best dressage tests we have done together. Looking forward to tomorrow, I adore Freestyle and I love my music – The Snow Queen! – and my horse loves it too! This is the second time that I’ll be presenting this routine. It’s great music for horseback riding.”

The event was also a first for Anne-Sophie Serre and her very young mare Actuelle de Massa. Tenth in the final ranking with a score of 70.565%, the French rider can be extremely proud of her performance. The couple performed a very pretty, fluid routine, under the watchful eye of the French coaches. When she left the arena, Anne-Sophie could not hide her joy: “This is a first for me and my horse in a World Cup! I am really happy about the way I felt in the arena and with how Actuelle behaved. She was really concentrated despite her young age and the little experience she has at this level. This is just our fifth Grand Prix together, so she is newcomer at this elite level. So, I am really pleased to be part of the event and with my horse’s performance. Tomorrow I’ll be doing my third Freestyle to music test, but I was particularly under pressure today, because the first class is often decisive for the rest of the competition. So, I have done what I set out to do, so far. I did a little over 70% by doing a routine without pushing things too much, so now it’s just about having fun!”

The top French rider in the ranking was Morgan Barbaçon-Mestre on her faithful Sir Donnerhall II Old, with 72.109%. The couple finished eighth in the class. Finally, a quick word about the third French couple involved. Despite their 13th place with a score below 70 (69.739%), Amorak and Stéphanie Brieussel completed a nice, smooth dressage test. “I am very happy with the performances of all three of them, since they managed to complete the tests without making any faults, as they say,” said Emmanuelle Schramm, Deputy Technical Director in charge of dressage for the French Equestrian Federation.