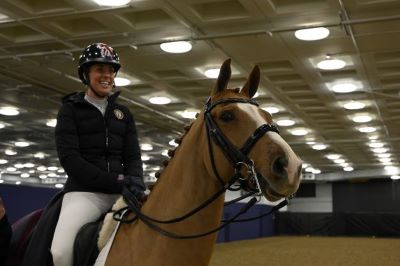 Organisers of The London International Horse Show have confirmed that Charlotte Dujardin, Britain’s joint most decorated female Olympian, will have the ride on her Olympic partner Gio to headline a fantastic line-up of Dressage stars at the Show, which runs from 16-20 December 2021. Dujardin, currently ranked as No. 3 in the world, will be taking part in the Show’s opening event, the FEI World Cup Dressage Grand Prix, which will take place on the morning of Thursday 16 December, and the FEI Dressage World Cup Freestyle to Music, which is part of the evening performance on Friday 17 December.

Dujardin will take centre stage aboard her Tokyo Olympic partner, Gio, and will be looking to retain her title in both competitions following her double victory in 2019. The combination, who claimed individual and team bronze medals in Tokyo – and in doing so took Dujardin’s tally of medals to six – will be firm favourites to reign victorious when they are reunited in December.

They will be joined by her Olympic teammate Lottie Fry, aboard her own and van Olst Horses’ Dark Legend. The 25-year-old, who is based in the Netherlands, has had a successful 2021 campaign with a string of impressive top-level Grand Prix results, including individual bronze and team silver at the European Championships, and Olympic team bronze.

Another member of that silver medal-winning European Championship team, Gareth Hughes, will be joining Fry and Dujardin at ExCeL London. Hughes, who won the Grand Prix at the British National Championships, will be looking to retain that form as he heads to The London International Horse Show.

Olympian Richard Davison strengthens the British contingent taking part at the Show. Riding Bubblingh, the horse that he rode to victory in the Grand Prix Freestyle to Music in the CDI3* at Hartpury earlier this year, Davison will be sure to put in a competitive challenge. He will be joined by Fiona Bigwood, riding Hawtins Delicato, the horse which was runner-up in both competitions at The London International Horse Show in 2019, when ridden by Carl Hester. Compatriot Lara Butler will also be hoping to bring her recent form to the Show with Kristjan, having won both the Grand Prix and Grand Prix Special at the CDI3* at Keysoe last month.

Challenging the British hopefuls will be Nanna Skodborg Merrald from Denmark, part of the Tokyo Olympic team which were pipped to fourth place by Great Britain, and Singapore’s Caroline Chew. Sweden’s Antonia Ramel and Frederic Wandres from Germany will also feature.

The afternoon of Friday 17 December will mark the return of the FEI Driving World Cup to London, featuring the world’s leading Carriage Drivers. 2019 London International Horse Show winner, and former World No. 1, Boyd Exell (AUS) will return to the Show fresh from victory in the FEI Driving World Cup at Lyon. The five-time World Four-in-Hand champion and nine-time FEI World Cup Driving Champion will take on Ijsbrand Chardon, a multiple World Champion and the current World No. 2, who will be looking to improve on his third-place position at the 2019 Show. The Dutchman will be full of confidence following success at the FEI World Cup qualifier in Aachen.

Koos De Ronde’s second place finish split Exell and Chardon at the 2019 Show, and the Dutch World No. 3 will return to London looking to go one step further. Another who is sure to bring some excitement to the action is home favourite, Dan Naprous, who is famed for his stunt Driving and always has the crowd on the edge of their seats.

Dries Degrieck (BEL), buoyed by a successful World Cup at Lyon, Mareike Harm, part of the German team at the FEI World Equestrian Games in 2018, and Jérôme Voutaz from Switzerland complete the line-up.

Simon Brooks-Ward, Show Director, said: “We’re delighted with this list of entries for The London International Horse Show and are very much looking forward to welcoming some of the best horse and rider combinations in the world to ExCeL London. It is set to be a fantastic competition, providing British fans the only opportunity in the UK to see so many quality athletes under one roof.  We can’t wait to see how the action unfolds.”

The London International Horse Show is the only UK Show to host all three FEI World Cup qualifiers in Show Jumping, Dressage, and Driving. The FEI Dressage World Cup Grand Prix and Freestyle to Music will take place on Thursday 16 and Friday 17 December, with the FEI Driving World Cup taking place on Friday 17 and Saturday 18 December. Top international Show Jumping competitions will also take place throughout the week, including the sell-out Puissance, The Longines FEI Jumping World Cup, and the unmissable London International Grand Prix, which wraps up the Show on Monday 20 December.