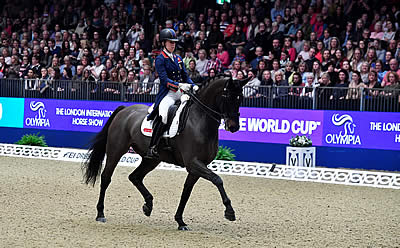 With the 2020 Olympics fast approaching, Olympia will be a pivotal event for competitors, both in terms of preparation and as a crucial opportunity to impress the Team GB selectors. Successful results at the Show could have an impact on team selection for Tokyo next year.

Keen to impress the selectors will be four-time Olympian and former British number one Richard Davison riding Bubblingh, a combination who were part of the winning FEI CDIO5* Nations Cup team in Compiègne earlier this year. He will be joined by teammate from that event, Charlotte Fry, riding the ten-year-old stallion, Everdale. Olympia will also welcome Lara Butler, aboard Rubin Al Asad. The combination was part of the second-placed team in the CDIO3* Nations Cup at Hickstead, where she also won the individual Grand Prix and Grand Prix Freestyle to Music titles. Rounding up a strong British contingent will be Louise Bell and Gareth Hughes, both of whom are having a career-best season, having each broken several personal best scores.

Following a successful summer, which included victory in the Grand Prix Special at Hickstead, Portugal’s João Miguel Torrao, a pupil of Carl Hester, will also be one to watch, riding his 10-year-old Quo Vadis stallion, Equador.

The full Dressage line-up can be found here.

With four of the world’s top five Drivers set to take their place in the starting line-up at Olympia, the competition will be hotter than ever.

One of Exell’s closest rival, Dutchman Koos de Ronde, the World No. 4, also returns to the Show, looking to put the pressure on the man who has dominated the sport for so long. Fellow countryman Ijsbrand Chardon, currently ranked third in the world, and runner-up to Exell at the FEI World Equestrian Games in 2018, will be another to provide a significant challenge.

World No. 5, Chester Weber, representing the USA, team gold medalist from the FEI World Equestrian Games in 2018, will be another to look out for, as will Britain’s Daniel Naprous, famed for his work as a stunt rider in productions such as Game of Thrones and Star Wars, with his trademark tight turns and unwavering pace.

The confirmed Driving entries can be found here.