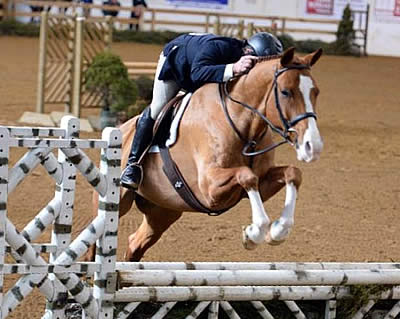 Lexington, Va. – Jan. 27, 2017 – The Stonewall Country Horse Show I, which benefits the Virginia Horse Center Foundation, concluded its first week of competition with hunter and jumper riders claiming titles in many of its numerous “A” rated divisions that were offered over the course of four days.

“Cala is an elegant, dependable mare that is a joy to ride,” said Wheeler. “We are headed to Ocala for the Winter Circuit and looking to qualify for Devon in the spring,” Wheeler explained. “Mary has the drive and desire to ride on an NCAA Varsity Equestrian team.”

Cismont Manor’s Shakespeare and Jason Berry took the tricolor in the Conformation Hunter division. Owned by Douglass and Kenny Wheeler, Jr., Cismont Manor has been the home of numerous top hunter horses.

“Shakespeare loves to perform at shows and is very business-like when preparing for his classes,” said Kenny. “Jason has his own stable and drives more than an hour each way daily to ride mine.  He is a perfectionist and works hard for me.”

“Devoted is a horse that we’ve had now for three years. We brought him along in the pre-greens and now he is doing the First Year Green Hunters, or 3’6″ Green as it is called now. We brought him as a 2-year-old in Europe, unbroken, and we’ve had the whole journey with him, which has been exciting,” said Wynne. “He puts a lot of effort into everything he does and a lot of times it makes him the winner of the class. We are very blessed to have seen him develop since he was a 2-year-old; that is something that just never happens anymore.”

The Stonewall Country Horse Show II, Feb. 2-5, will offer “A” rated hunter and jumper classes, schooling classes, and USHJA Outreach classes. The affordable schooling and Outreach classes give exhibitors the ability to school their younger horses before the start of summer season.

In addition to the Outreach classes, Stonewall Country II will provide junior equitation competitors the opportunity to earn valuable points in the WHIS, ARIAT, and the THIS Children’s Medal. Some of these classes can qualify a junior rider for the Amy Tlvisaker Reistrup Equitation Challenge, hosted each year at the Lexington National Horse Show.

To learn more about the Virginia Horse Center and their entire line up of exciting events, please click here.