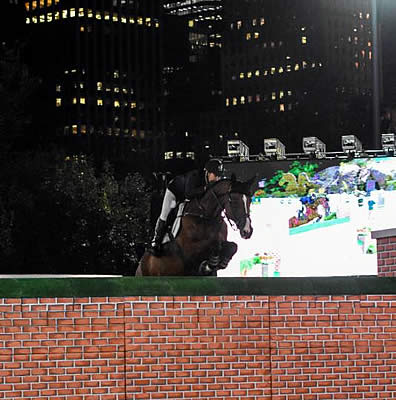 The competition will begin with a traditionally decorated brick-wall obstacle set at 4 feet, 6 inches high. As combinations clear the jump, the wall is raised for reach round and the thrilling competition continues until only a single combination remains. Who will clear the towering wall as it grows taller and taller? Join us and find out!

Last year’s competition saw a tie for McLain Ward riding Evergate Stables’ ZZ Top VH Schaarbroek Z and Andrew Kocher aboard Eagle Valley Partners’ C’Havinia. Seven entries started over the imposing Puissance wall and the competition continued up through four more rounds as Ward and Kocher jumped head-to-head at the final height of 6’9″. Neither rider was able to clear the wall at that height, leaving them tied for the win.

Ward entered 2016’s competition at the last minute, though he’s no stranger to Puissance competitions. In fact, he has won many (including seven times at the Washington International Horse Show), and noted that the highest he has cleared is a staggering 7’3″.

Kocher was a first-year competitor at the RCPHS last year, and he had only attempted the Puissance a few times prior. “That mare (C’Havinia) has never done anything like that,” he said. “I have done the Puissance three times at the Washington International Horse Show, and the first time was really bad, but this time I have been practicing for a few weeks. I didn’t have a big enough wall, so I put some hay bales in there to stack it up. It was fun,” he laughed.

Kocher is excited to return to this year’s competition, and commented, “I really like the Central Park Horse Show. It’s just really exciting because it’s right in the middle of New York City, and they have a big crowd. I love the Puissance and I love the high jump. It’s one of my favorite classes and I wish they had it at more horse shows.” He added, “These classes really highlight everything we are supposed to be. We are supposed to be fearless and tough, we have to go out there and go for it.”

Regarding the addition of the Puissance competition to the Rolex Central Park Horse Show in 2016, Ward added, “It is a fun way to end the evening. It gets everybody into the competition, and I think the draw of this class is that it is something that everybody can easily understand-how high can you jump?”

A portion of ticket sales will benefit a lengthy list of New York, as well as equestrian based, charities.

Seating is limited and the demand for tickets is expected to be high. All seats have unobstructed views. All ticket sales are final, non-transferable; no refunds and no exchanges. Gates open 30 minutes prior to start of event.