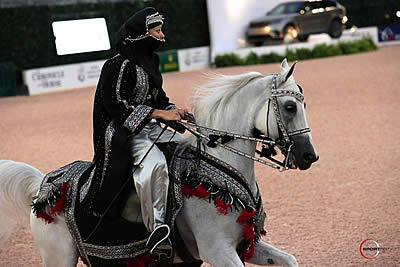 The evening began with the Arabian Mounted Native Costume class, impressing and entertaining the spectator audience as they experienced both horses and riders galloping in traditional dress used centuries ago. A number of classes were offered throughout the night and included under saddle competition featuring Hunter Pleasure Pro/Am, Western Pleasure Pro/Am, and Country English Pleasure Pro/AM, as well as in-hand and halter competition. Classes alternated between performance classes and in-hand competition. In-hand competition saw Junior Mares, Junior Stallions, Senior Mares, and Senior Stallions presented to a panel of judges. Gold, silver, and bronze medal champions for each division were honored throughout the evening.

Melissa Fry’s mount Harry Trotter, exhibited by both John Ryan and Fry, was awarded the gold medal in the Arabian Country English Pleasure Pro/Am competition, which saw the largest number of class of entries. “This is my second year being back after 17 years away from Arabian horse competition,” said Fry, who hails from Annapolis, MD, of her winning ride. “To be doing this after only the second year back – it’s just such a perfect experience. The Arabian has always been a part of my life, so I’m just so proud to be here representing the Arabian breed.”

After traveling all the way from her hometown of Montecito, CA, Dr. Nancy O’Reilly said that Wednesday night’s ride was a once-in-a-lifetime experience. “I ran the New York Marathon here, and now I’ve ridden in Central Park. My bucket list is getting smaller,” she laughed. “This has been a wonderful event. You can’t make stuff like this up. The story will get better and better as the years go on. The horses that are here and the trainers that are here, they’re the best. This is what it’s all about. Being surrounded by people who love horses and who love their horses. Those are the people you want to be around.”

Baha AA, owned by Baha Partners LLC, and Andrew Sellman were presented with the gold medal in the Arabian Senior Stallion Halter division to conclude the evening’s competition, while Ted Carson and Tempezst, owned by Nichole Mesik, captured the silver medal. Arabian Junior Stallion Halter saw yet another win for Ted Carson, this time earning the gold medal with SF Baahir Jawhar, owned by Chloe and Al Cox of Sycamore Farm LLC.

One of the panel judges, Graham Smith (AUS), commented on the high caliber of Arabian horses displayed in Wollman Rink. “It’s been a great experience. The facility is amazing, and I give that credit to the organizers,” he said. “New York is New York and what a great place to promote not only the Arabian horses, but also the other disciplines as well. The level of talent we saw tonight was very high. I was happy with the placings and the horses are competitive.”

Nancy Harvey, President of the Arabian Horse Association (AHA), was a first-time attendee to the Rolex Central Park Horse Show and commented, “I was amazed at the quality of the horses, and just the ambiance of the entire facility was wonderful. Everything was amazing. I don’t have enough superlatives to describe this experience.” She continued, “I think an event like this is exceptionally important for the outreach that it provides. A lot of people in this city never get to see horses, let alone Arabian horses. It’s wonderful to see the support that the Arabian community gives to each other, and if we can show others that these horses are important to us, we’ve done our job,” she concluded.

Full results from the 2017 U.S. Open Arabian presented by Aljassimya Farm are available at www.arabianhorseresults.com.