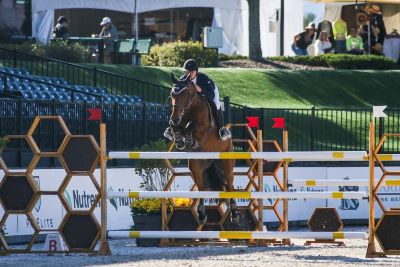 Forty-three horse-and-rider pairs challenged the first round of the Michel Vaillancourt (CAN) designed course, with 17 pairs earning a chance at the jump-off track. Fresh off a Sunday Classic win from Tryon Fall 3 competition aboard Blue Diamant, Driscoll and Donald Stewart’s 2011 Polish Warmblood mare (Alvaro x Flourin Du Rouet) took on their first 1.45m class together and won after she decided to test her ride’s jump-off skills:

“This was her first 1.45m, so I rode it a little aggressively, but she responded beautifully. Everything rode nicely. I thought the triple was good. The time was right on,” she reported of the first round. “This is only my second week showing [Flotylla], and every time I go in the ring, I feel like I’m learning something new about her, so I decided to take a shot and I didn’t know how she would respond. I really sliced the verticals, and had the big gallop to the last, and I thought I would take a shot and see how it ended up!”