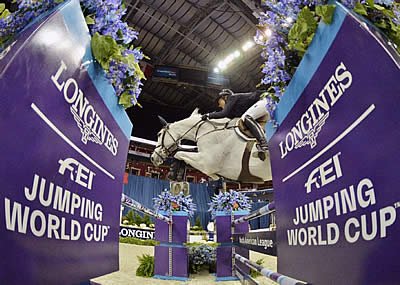 The $40,000 Welcome Stake was held as a “winning round” format, where the top 10 riders, regardless of how many faults they had in the afternoon’s first round, were invited back for the second round which was held in the evening session. Tyree and Bokai came back seventh in the order of the top 10 and put down a fast, clear round in 34.88 seconds for the win. They followed the 2018 FEI World Cup Jumping Final winners Beezie Madden (USA) and Abigail Wexner’s Breitling LS, who would finish in second place in 35.00 seconds.

Tyree said it was watching Madden from the in-gate that gave her the plan to win.

“Bokai is so quick, and I had the advantage of seeing Beezie go before me. She is so tight in the turns, so I was able to count some of her strides, and I really just wanted to try and do what she did. She did six [strides] to the last [jump]; I got a good gallop, and I kept going in five. I really got lucky there; my horse gave an amazing effort, which he shouldn’t have done. He just has a huge heart and he wants to win. He just rises to the challenge when it matters.” – Catherine Tyree

Youth continued to prevail during the evening session when 17-year-old junior rider Brian Moggre beat 14 other top professionals to win the $35,000 International Jumper Accumulator Costume Class. In his “Grease” costume, he guided MTM Flutterby, an 11-year-old Dutch Warmblood mare by C-Indoctro and owned by Major Wager LLC, to a top score of 65 points in the fastest time of the night in 40.23 seconds.

The first through fifth place riders all had 65 points, which meant they cleared all 10 jumps on course, including the final “joker” jump worth 20 points. The joker jump was a specially-designed Washington Capitals hockey jump sporting the team’s winning Stanley Cup trophy and was especially fitting with Olympic gold medalist McLain Ward dressed as the Caps hockey player Alexander Ovechkin for the class.

“I knew whatever was going to happen. I just had to go in there and give it my all and hope it worked out the best for me. It did, so I’m very appreciative of that.”  – Brian Moggre