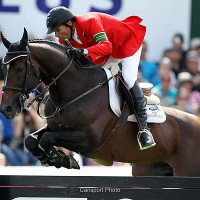 Calgary, Alberta – One of Canada’s great Equine artists will forever be remembered for capturing a “Moment in Time” of the world’s most famous show jumping horse. 2012 is an Olympic year, and a new horse will reign as champion and carry the title for another four years, but the world will never forget the one whose place it will take. Rocky Mountain Show Jumping is pleased at this time to announce that Kim Penner has captured a famous Hickstead “Moment in Time.”

Kim’s rendition of the Hickstead “Moment in Time” is a must see, and will be unveiled next month in Goby’s Grill at Anderson Ranch, available for all who love the sport to see during their tournaments hosted this summer.  Just one month prior to the London Olympics, John Anderson and Phillip Rozon, the lead promoters’ of the project will be pleased to present Kim’s painting of Hickstead, Eric Lamaze’s four legged partner who carried him to countless victories around the world, and was tragically lost last November during an International competition in Verona, Italy.

What makes this painting extra special is what the founders of the project have planned. A limited number of Giclee’s of the original painting in the original size will be offered to the public with a special certificate of authenticity signed by Eric.  With many already spoken for, proceeds from the sales will go to the Rocky Mountain Show Jumping Hickstead “First Leg Up” program that will allow the Canadian Equestrian world to give opportunity to inner city kids by providing them with the chance to ride, as well as support up and coming riders in the sport opportunities that might not normally be available to them. This program stems from a great program that the PGA endorses known as the First Tee. Funds will also be provided to an organization that is dear to Eric one that he supports by being an ambassador. JustWorld International acts as a catalyst for positive change in the developing world by working with local partner organizations to provide basic education, nutrition, health, hygiene, and vocational programs for children in impoverished communities in Honduras, Cambodia, Guatemala, and Brazil, and will also be a recipient of the “Moment in Time” proceeds. 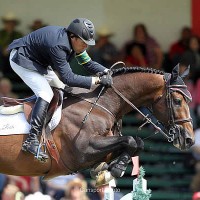 “Although we never had the opportunity to have Hickstead compete at one of our many tournaments here at Anderson Ranch, I count myself extremely privileged to have ridden on a few Nation’s Cup events having the famous partnership of Eric and Hickstead as our ace in the hole.” explained John Anderson, president of Rocky Mountain Show Jumping. “Having Eric & Hickstead as the anchor member of our team made all of us rise to another level. We knew we would almost always be guaranteed a clear round by the partnership, so it made us all ride better,” remembers John. “I think that it is safe to say that Hickstead is why Canada has had such tremendous success Internationally over the past number of years.”

The co-promoter of the project Phillip Rozon is a resident International Judge at the tournaments hosted by Rocky Mountain and recalls how the idea came about. “John and I have become quite good friends, and talk a number of times a week on the phone. He was telling me about some great art he just bought and sent me a link to the artist’s website. I asked him if she ever painted show jumpers, and it was like a light bulb flashed on in his head.” said Phillip. “That’s a great idea he said, and then he just hung up the phone. Two days later he called me back and said, “Guess what?” and that’s how the project was born.” laughed Phillip. “I’ve discussed this with Eric and he is very happy that Hickstead will be responsible for making the sport expand in areas that would normally not see these opportunities.”

We caught up with Kim recently to ask her about the project. “I first met John many years ago when I lived in Manitoba and he was out competing at the Royal Manitoba Winter Fair. My daughter Amanda loves to watch him ride, and competes at some of the events that he now hosts. He has been a great supporter of my work, and has purchased quite a few of my original pieces.  He always takes time to visit if he is at one of our trade shows,” noted Kim. When he told me that he wanted me to paint Hickstead, I immediately told him I would be honoured, especially after he told me what the plans were for the painting,” added Kim. “I have painted many horses in my career and have loved my work, but never felt the pressure to perform as I have in this project. I have been asked to paint the best horse the world of show jumping has ever seen. I didn’t sleep for many a night thinking about the project. As I near completion, my paint brushes have told me while I painted what the world already knows. He was truly the best! I am glad that this painting will touch the lives of so many people.” 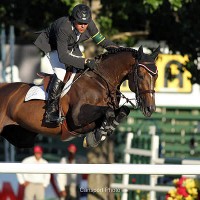 Look for more details about the project after the unveiling in June, but for now, all one can do is imagine and remember the World’s Best Show Jumping horse.

If you are interested in one of the limited edition Giclee’s authenticated by Eric Lamaze, make sure you “Like” the Rocky Mountain Show Jumping Facebook Page to be kept up to date with the details on how to purchase!