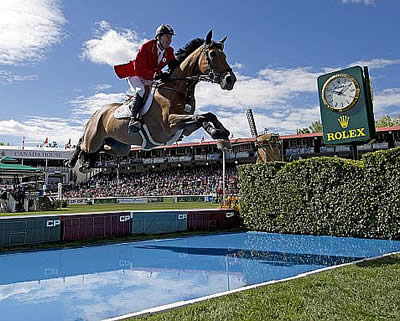 In front of a sell-out crowd bathed in early autumn sunshine, course designer Leopoldo Palacios had laid out a tough first round track which whittled the original 47 horse and rider combinations down to the 12 who went through to the second round. In the 19 years that Leopoldo has been designing in the International Ring, there has only ever been two jump-offs, so just reaching the two-horse jump-off was a considerable achievement in itself for Millar and Reed Kessler from the USA.

Millar, who has competed at every Spruce Meadows ‘Masters’ since the inaugural tournament in 1976, had to use every ounce of experience to overcome Reed Kessler riding Cylana in the jump-off. But the 47 year age gap counted in Millar’s favour as he was able to watch Kessler ride a third clear round before coming into the ring and matching her achievement, but 2.3 seconds faster to win the title. Marie Etter from Switzerland was third riding Admirable.

Speaking after his victory, Ian Millar said, “You know, the afternoon goes by in a blur – it took several hours but it just happened so fast and everything just turns on the horses’ footfall. It’s incredible when you consider that there’s 47 in the competition and virtually every horse and rider combination is extremely good at what they do, otherwise they wouldn’t be here – and any one of them on a given day can win, so the set of circumstances that has to fall together and what has to fall in line for one person to win is quite incredible.”

At one stage the weather threatened to dominate the Spruce Meadows ‘Masters’, one of the three equestrian Majors, and part of the Rolex Grand Slam of Show Jumping.

Unseasonal autumn snow greeted the riders arriving earlier in the week and, facing weather conditions more akin to late December than early September, the Spruce Meadows team worked throughout the day and night to clear the huge International Ring of 12 inches of snow covering it, and the Spruce Meadows ‘Masters’ competition was able to get underway on Thursday.

Many of the world’s greatest riders, including Rolex Testimonees Eric Lamaze, Steve Guerdat and Kevin Staut, were appearing at the Spruce Meadows ‘Masters’, having flown directly from France following the World Equestrian Games. Both Steve Guerdat and Christian Ahlmann, holders of the Rolex Grand Prix titles from CHI Geneva and CHIO Aachen respectively were in contention for a Rolex Grand Slam of Show Jumping bonus for winning two of the three shows, but despite a top 10 finish for Steve in the Grand Prix, the bonus remains unclaimed.

Spruce Meadows, which first staged an equestrian competition 39 years ago, is one of the three equestrian Majors, but despite the sheer size and scaled of the venue, it maintains a unique atmosphere which differentiates it from the fellow Majors at CHI Geneva and CHIO Aachen.

Spruce Meadows President Linda Southern-Heathcott commented, “Spruce Meadows was a very small venue in the beginning and the sport was very young, so my mother and father had to create a family atmosphere and we believe that the athletes and the corporate supporters are part of our family, and the media are fans. Our place is their place, for them to enjoy and it is their home and we invite people from around the world into our home and so it’s a special place that way and just because we have always really strived to have that feeling.”

“Spruce Meadows is unique,” said Lamaze. “They have never changed the tradition here. There is nothing else like it from the organizational side of it. The people around these grounds are so helpful and are so giving of their time to make Spruce Meadows what it is.”

The Rolex Grand Slam of Show Jumping now moves indoors to the CHI Geneva in December where Ian Millar will be aiming to take the next steps towards the €1 million bonus.