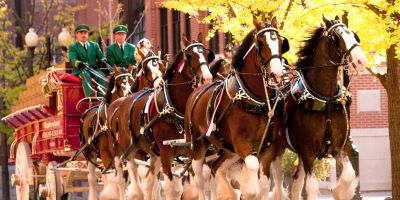 The Military Bowl Foundation announced that the world-famous Budweiser Clydesdales will continue their tradition of headlining the gameday Military Bowl Parade from Downtown Annapolis to Navy-Marine Corps Memorial Stadium, prior to the 2021 Military Bowl presented by Peraton, benefiting the USO, on Monday, December 27.

This year’s Military Bowl Parade steps off at City Dock at 10 a.m. ET and proceed through historic downtown along Main Street and West Street en route to the stadium. Admission to the parade is free.

The parade annually attracts thousands of spectators lining the streets of Annapolis to view a wide variety of groups participating in the parade. The parade also features several Recipients of the Medal of Honor, the nation’s highest military honor presented for personal acts of valor above and beyond the call of duty.

A color guard will lead the procession, followed by the Budweiser Clydesdales, musical groups, civic organizations, military-themed groups, and youth clubs, including Anne Arundel Youth Football Association (AAYFA) championship teams. (The Bowl invites AAYFA championship teams to participate in the parade and receive complimentary game tickets each year.) Each team participating in the Military Bowl will be represented by its marching band and spirit squad.

“The Military Bowl Parade is an annual tradition bringing together residents who live nearby and football fans who travel to the National Capital Region to cheer on their teams,” Military Bowl President & Executive Director Steve Beck said. “It is a special moment when the Parade starts and groups begin making their way through historic downtown to the stadium. The Military Bowl is very appreciative of our partners at Katcef Brothers Inc., who arrange the participation of the Budweiser Clydesdales.”

This year’s Military Bowl presented by Peraton, benefiting the USO, will be held on Monday, December 27, kicking off at 2:30 p.m. ET and televised on ESPN. The game once again will match teams from the Atlantic Coast Conference and the American Athletic Conference. Proceeds from the Bowl benefit the USO and Patriot Point, the Military Bowl Foundation’s retreat for wounded, ill and injured service members, their families, and caregivers.

About the Author – EOA Staff

Eye On Annapolis is a community-based site focusing strictly on Anne Arundel County. These staff postings are general news postings made by our team of bloggers throughout the day and are not attributed to any one particular staff person.