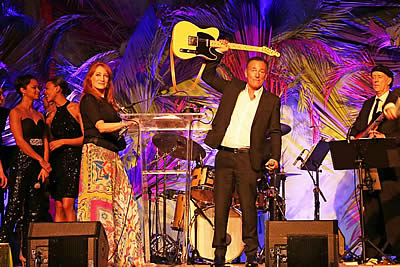 Photo courtesy of the USET Foundation.

Wellington, FL – Bruce Springsteen and Patti Scialfa will join honorary chairmen Lou and Joan Jacobs as chairs of the United States Equestrian Team (USET) Foundation’s Take Me to Tokyo gala, to be held on Friday, January 17, in Wellington, FL.

The gala, hosted by the Jacobs at their Deeridge Farm beginning at 6 p.m., will raise critical funds to support the U.S. Equestrian Teams headed to the 2020 Tokyo Summer Olympics and Paralympic Games.

“Helping this country’s equestrian athletes and supporting the U.S. Equestrian Teams has become a family affair for us,” said Scialfa, whose daughter, Jessica Springsteen, is successfully competing at the highest levels of equestrian sport and who has represented the U.S. on Nations Cup teams internationally.

The Springsteens were an integral part of the success of the USET Foundation’s 2016 Rockin’ Rio gala, which raised in excess of a $1 million, and the family hopes to help set new records again this year.

“Patti and I have been involved with the horse world for more than 20 years since Jess started riding when she was five years old,” said Bruce Springsteen. “Our lives have been deeply enriched by our involvement in the riding world. I’ve gotten to watch my daughter grow up into a young woman of character and excellence. I’ve gotten to watch the best in the world compete year after year, and I know what that takes.”

The gala evening will commence at 6 p.m. with a cocktail hour and a super silent auction, generously sponsored by NetJets, and dinner beginning at 7 p.m. followed by a live auction sure to be the most exciting one ever! The Boss will be auctioning off a signed Harley Davidson motorcycle and a signed Fender guitar to benefit the Team.

If you are interested in joining the Springsteens and the Jacobs in supporting the USET Foundation and the country’s equestrian athletes, please don’t wait as it is almost sold out. Tickets and tables may be purchased for Take Me to Tokyo here.

The event will also include the presentation of the USET Foundation’s most prestigious annual awards, including the R. Bruce Duchossois Distinguished Trustee Award; the Lionel Guerrand-Hermès Trophy, given to a young rider who exemplifies both horsemanship and sportsmanship; and the Whitney Stone Cup, awarded to an active competitor who displays consistent excellence in competition and high standards of sportsmanlike conduct.

For more information on the USET Foundation and Take Me to Tokyo, please visit www.uset.org.