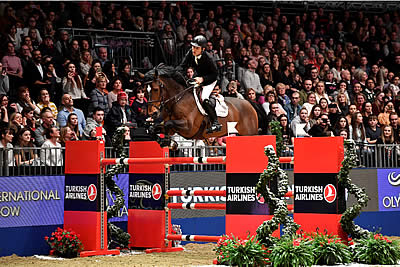 Olympia, The London International Horse Show concluded in spectacular fashion, with the world’s top Show Jumpers in action in the Turkish Airlines Olympia Grand Prix, which was won by Britain’s Scott Brash. Meanwhile, Emanuele Gaudiano demonstrated why he is known as one of the fastest riders on the circuit with a win in The Turkish Airlines Speed Stakes. The evening wrapped up with the British flag flying once more as Holly Smith was crowned with the 2019 Leading Rider Award.

The final Saracen Horse Feeds Shetland Pony Grand National races of the season saw wins for Lily Phelan on Sedgehill Talisman and Lucy Aspell riding Merkisayre Sea Duble in her last year of being eligible for the competition. Meanwhile, The Kennel Club Small Agility Stakes Final went to Dave Munnings with Boost Bite for the third year in a row.

The final night crowd was in for a real treat as a thrilling competition unfolded in the showpiece Turkish Airlines Olympia Grand Prix. It was horsemanship at its best as Scott Brash, in the very last round of 2019, produced a magical display on Lady Harris and Lady Kirkham’s Hello Vincent to snatch the prize from his six rivals in the jump-off.

“Winning my last grand prix of the year, in front of a home crowd – it doesn’t get any better than that,” said a visibly thrilled Brash.

Australia’s Edwina Tops-Alexander, on brand new ride Identity Vitseroel, had given it her all, her 11-year-old bay gelding trying his heart out with prodigious leaps and turns on a sixpence, but Brash’s smooth horsemanship was pure class and, with the crowd screaming him down to the final fence, the clock showed that he had shaved 0.82 off her time.

Holly Smith, who has enjoyed an outstanding show and took the Leading Rider accolade by an astonishing 28 points, finished third on Hearts Destiny and sealed a brilliant season.

“I’m absolutely delighted with all three of my horses, but Hearts Destiny has taken me to places I’ve only dreamed of – a bronze medal at the Europeans, winning the Aga Khan Trophy in Dublin. And the calibre of riders here at Olympia – seven of the world’s top 10 – makes it all the more special.”

In fourth place was new face James Wilson, 25, on Imagine de Muze, a mare that has given him a dream year. “I’ve been watching Olympia since I was a kid, so this is particularly special,” he said. “This horse has made all my dreams come true: my first World Cup, my first Nations Cup, and now my first Grand Prix placing. She has catapulted me right up there and now I’ve got Tokyo in my sights.”

Seven riders made it through to the jump-off, four of them British, and, as tension built, Brash was coolly waiting in the wings on Hello Vincent, a horse produced by new Voltaire Design under-25 champion Jodie Hall-McAteer and which he’s only been riding for a few months.

“The others were very fast, and I knew I had to pull out all the stops,” said Brash. “I just tried to keep it tight. I got a good first forward distance and then managed the seven strides to the tray, which is what you had to do to win. The crowd was great and really gets behind you. I’m so proud of Vincent – he was amazing.”

Italy’s Emanuele Gaudiano led from the front to take the Turkish Airlines Speed Stakes with Carlotta. As fourth to go in the 20-strong class, he set a tough target and held on for the victory.

“There was not so many options for me, so I just had to follow the course,” said Gaudiano. “My horse is a bit smaller than some of the others, who would be able to take out a stride, so I knew I had to go fast.”

Gaudiano has ridden Carlotta, a 10-year-old mare, since her first competition and she has been a prolific winner for him. “She has now won over 65 international classes, and is my [specialist] speed horse,” he said.

Britain’s Holly Smith finished second with Denver, a result which was part of her tactics to clinch the Leading Rider of The Show. “I was going to jump Denver in the Grand Prix, but decided to enter him in this,” she said.

Meanwhile, rising star Jodie Hall-McAteer punched the air and hugged her horse as she realised she had won the coveted Voltaire Design Under 25 British Championship with two superb clear rounds on Shalt’n Peppa.

Under a new format, the young riders went through a qualifier on Friday, won by Georgia Tame on Quintella, with the top 10 competing in front of a packed house on the prestigious final night of the Show. The best five – all of whom went clear in the first round – then progressed to the jump-off.

Jodie, 19, was first to go in the jump-off and set the target of a clear round in a time of 30.75 seconds. The consistent Georgia came closest, riding a mature round for clear in 32.38 seconds.

“I’m so proud of my horse,” said Jodie, who competed on her first senior FEI Nations Cup team this year. “It’s right up there with the highlights of my career. Everyone wants to win this.”

Earlier in the day, Millie Lawson made the most of her long journey from Aberdeen to London with victory in the Equine Rescue Services Mini Stakes for 128cm ponies. Riding Priestwood Hardy, she was chasing a tough target set by Tabitha Kyle (Living the Dream) in the six-pony jump-off, but the 12-year-old utilised her mount’s natural enthusiasm and strength to pinch 0.05 seconds from the time.

“He was very hyper,” joked Millie. “I managed to get tight to the [penultimate] upright and just gallop at the last. It’s a dream come true to win here; it’s amazing!”

Emma Burrow had the perfect wedding and Christmas present combined when her Welsh Section D Dyffryngwy Sir Picasso was judged champion of the BSPS Ridden Mountain and Moorland Championship Final sponsored by LeMieux.

The 26 ponies qualified for the Final, representing all the native breeds – Shetland, Exmoor, Dartmoor, New Forests, Dales, Fell, Connemara, Highland, and Welsh (Section A, B, C, and D) – made a spectacular sight assembled in the Grand Hall of Olympia.

Emma (née Boardman), a native pony producer from Carlisle who only got married a fortnight ago, bought Dyffryngwy Sir Picasso as a six-month-old foal from his breeder, Gwyneth Griffiths, who had travelled from Wales to watch.

Dyffryngwy Sir Picasso has swept the board this year, winning at HOYS, the RIHS, Royal Welsh and Royal Lancashire, qualifying at Westmoreland County Show where judge Tom Best told Emma: “Now go and win the big one.”

Taking the reserve position was striking Highland stallion Melanie Stanford’s Benbreac of Croila, shown by Matthew Cooper in a fitting end to his showing career. The 16-year-old grey, who will retire after Olympia, obviously has a charming temperament, standing rock-still amid all the post-class hubbub back in the stables.

The final result was extremely close, with the combined scores from conformation judges Helen Horsfall and John Harvey and performance judges Nigel Hollings and Nicola Turner adding up to 177 for the winner and 176 to the reserve.