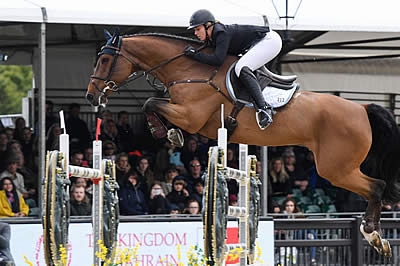 Day four of Royal Windsor Horse Show welcomed the international circuit’s finest Show Jumpers, with Friday’s Manama Stakes’ winner Holly Smith making it a double in the Kingdom of Bahrain Stakes for the King’s Cup. Earlier in the day, Robert Whitaker won the Martin Collins Enterprises Senior 1.45m Grand Prix, while fellow British rider, Guy Williams, took top honours in the Falcon Stakes. Her Majesty The Queen was in attendance in the Castle Arena to watch the Land Rover Services Team Jumping, the international display by the Dubai Mounted Police, and the Martin Collins Enterprises Show Pony Championship. Her Majesty also presented a number of awards, including the award to the Best Turned Out Trooper. Driver Boyd Exell looked set to take his tenth win following a competitive performance in the cross-country.

The day got underway with the two-round Martin Collins Enterprises Senior 1.45m Grand Prix, a national class held in the resplendent Castle Arena. After nine riders made it through to the second round, it was Rose Moss and Carlos F who set the early pace, going double clear in a time of 38.96 seconds. Next to go was Jay Halim, who also went double clear, much to his delight, giving his grey stallion Aragon Z 414149 a congratulatory pat on the neck. Robert Whitaker entered the Arena with Major Delacour to rapturous applause from the crowd, who encouraged the duo over every obstacle. Whitaker produced a fluid and fault-free round, which was enough to take top spot in 32.93 seconds, over one and a half seconds ahead of second-placed Lily Freeman Attwood.

With 13 of the world’s current top 20-ranked Show Jumpers competing in the day’s showpiece class, the Kingdom of Bahrain Stakes for the King’s Cup, the level of competition proved to be incredibly high from the outset. The testing 1.55m Bob Ellis-designed course demanded every bit of skill from the 31 horse and rider combinations that started, with just six eventually progressing to the jump-off, including three British riders: Harry Charles, Ben Maher, and Holly Smith. Charles was first to go, and despite some early promise and tightly negotiated turns, he and Borsato put down the first of the swan-themed double. Friday’s Manama Stakes’ winner, Holly Smith, laid down the gauntlet producing an exceptional ride, crossing the line in 34.02 seconds. With Jessica Springsteen (USA) and Gregory Wathelet (BEL) both accruing eight penalties, it was up to Ben Maher and Martin Fuchs to challenge Smith’s time. But it wasn’t to be after both riders were unable to match Holly Smith’s unassailable time. Later in the afternoon the Leicestershire-based 30-year-old was all smiles when Her Majesty The Queen presented her with the King’s Cup trophy.

The day’s action culminated in the 1.50m Falcon Stakes, in which British riders again proved to be the dominant force. 10 riders, including three Brits, progressed to the second round, with American Kent Farrington setting the early pace, going clear with his mare Kaprice. Canadian Tiffany Foster and Swedish world number two-ranked rider, Peder Fredricson, both put in competitive performances with Foster knocking Farrington off top spot. However, there was a late charge from two experienced British riders, first from William Funnell and Billy McCain, and then from last to go Guy Williams, who masterfully steered his stallion, Rouge de Ravel, around the testing course, pipping Foster to top spot by 0.45 seconds.

Reflecting on his win, Williams said: “I won here last year, and it seems to be a great Show for me – I don’t know what it is about this Arena! I always love competing here, as the crowds are absolutely fantastic, and I hope they’re happy with another British winner.”

Sussex-based Mrs Jago, who celebrated her 95th birthday last week, was beyond excited when her John Harvey-produced 128cm winner, Whiteleaze Secret Charm, landed the Martin Collins championship in the Castle Arena — a result all the more remarkable since jockey Eva Herring, 10, had only ridden the pony once before.

The novice show pony title went to Cheshire with Team Hillyard, who produced the five-year-old 128cm mare Kouros Mayfia, partnered with great aplomb in the Castle Arena by Livie Smith, 10. This was only the third-ever show for the combination and as producer Lulu Hillyard commented, “It was a big ‘ask’ but Livie just rose to the occasion.”

The coveted mini title meant a major double for the team as co-producer Katie Smith — Lulu Hillyard’s daughter — led Imogen Stathern, 8, to victory on her Royal Windsor debut. Her pony, Seamoor Lady Derby, is a past victor at the Royal International Horse show, Hickstead, but it is Imogen’s first season in the show ring and therefore first visit to Royal Windsor.

Matthew Cooper claimed the ridden native championship with the Stanford family’s former Royal International Horse Show supreme, the big-winning home-produced Highland stallion Benbreac of Croila, who earned his ticket to compete in the final at Olympia in December.

Lead rein and Ridden natives — vying for a hard-fought place in the final at Olympia in December — were headed by the Stanfords’ prolific-winning Highland stallion, Benbreac of Croila, who is produced at home by the family in North Yorkshire and partnered at shows by London-based Matt Cooper.

A mainly dry day provided good conditions for competitors driving the marathon in the Land Rover International Driving Grand Prix. As last year, the overnight leader – world champion Boyd Exell from Australia – drove an exemplary round, his competitive times in the cross-country obstacles increasing his lead ahead of the final phase.

Exell actually came in second in the marathon phase, but just 0.03 of a penalty behind the marathon leader, Koos de Ronde from the Netherlands, who recorded the fastest time in four of the obstacles. This has moved the experienced Dutch driver up the order to third place from sixth after the dressage. Ahead of him, however, remains his fellow countryman, young driver Bram Chardon, whose good marathon – he was third overall – has retained him his second place. He is 9 penalty points adrift of leader Exell which gives the Australian three cones in hand in the final phase.

The Netherlands retain their lead position in the Nations competition with Belgium moving up from fifth into second place, France now challenging them closely for third.

Fortunes changed a little more radically in horse pairs, where the scores were considerably closer among the top competitors. A new leader emerged when third-placed after the cones, Sandro Koalick from Germany, drove a storming marathon to head this section and move into first place overall. Another to excel in the marathon, Franck Grimonprez from France, fourth in the Land Rover International Driving Grand Prix last year. jumped from fifth after the dressage to second overall at this stage in the competition, less than 4 penalties behind the leader. Lars Schwitte is currently in third place.

In pony four-in-hand there has been no change in the overnight order with experienced Dutch driver Jan de Boer winning the marathon to give him a comfortable lead for the final phase. Tinne Bax from Belgium retains her second place but has less than a cone in hand (3 penalties) over third placed Jaqueline Walter from Germany.

More than 400 horses and a 600-strong cast of artists, dancers, and world-renowned international equestrian acts travelled from across the globe to bring the Victorian era back to life to celebrate the 200-year anniversary of the birth of Queen Victoria.

The show welcomed a number of carriage horses into the Castle Arena, helping to create scenes from the period, including Victorian London, as depicted by Dickens, complete with cockney chimney sweeps, hansom cabs, and park drags.

The 90-minute show was staged by a BAFTA award-winning team and transported the audience back to the era, drawing on some of its typical characteristics, such as the Music Hall, Gilbert & Sullivan, and Charles Dickens.