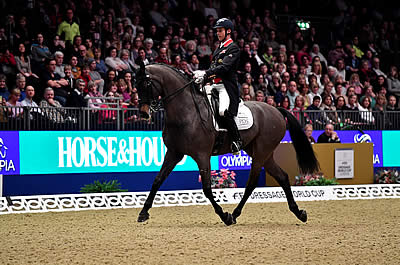 The World’s best Dressage riders were out in force on day one of Olympia, The London International Horse Show, where Charlotte Dujardin was crowned winner of the FEI World Cup™ Dressage Grand Prix supported by Horse & Hound.

In addition to the top-class competition, some of the sport’s most respected names took centre stage to be part of Dressage Unwrapped, hosted by Carl Hester MBE, Gareth Hughes, and Richard Davison. With the help of some well-known equestrian friends, including Olympic, World, and European medalist Pippa Funnell and Performance Manager to Britain’s Senior Eventing Team, Richard Waygood, the unique masterclass explored all aspects of dressage, including producing, training, and managing dressage horses, how to cope with the pressures of competition, and insights from top dressage judge Stephen Clarke.

Spectacular performances from The Musical Ride of the Household Cavalry Mounted Regiment and Jean-François Pignon, and a fast and furious opening race from The Saracen Horse Feeds Shetland Pony Grand National, won by Freddy Tewson-Green, added to the excitement on the opening night of the 2019 Show.

Not only was Charlotte Dujardin back in pole position in the FEI Dressage World Cup Grand Prix, but Britain completely dominated, taking the top four places.

Charlotte was in a league of her own, riding the spectacular 10-year-old Mount St John Freestyle, to win by a margin of more than 5% on 81.55%.

Charlotte said: “This was Freestyle’s second indoor show. Olympia is a really big atmosphere for a young horse that doesn’t have much experience. While I was going around the outside of the arena, I could hear everybody going, ‘Good luck, Charlotte’ — that’s how close the audience is. I am so excited about her; each time she performs, she just gets better. I was so pleased with how she dealt with it all.”

Carl Hester, the man dubbed The Master of Dressage, and the 11-year-old British-bred Hawtins Delicato took second place on 75.79%. The combination had just one error in the two-time changes, otherwise producing a fluent, soft test.

“He can do a lot better; he’s the most talented horse I’ve ever had, but it has taken time for him to gain confidence. Considering this was his first test since the Europeans, he’s done great,” said Carl.

Lottie Fry, who is based with the Van Olsts in the Netherlands, took third place with the hugely talented 10-year-old stallion Everdale, her second string. It was the 23-year-old’s second competition in her homeland in five years and only the combination’s fifth grand prix test.

Lottie said: “I am really proud. I cannot quite believe I am sitting next to Carl and Charlotte at this press conference. This is the biggest atmosphere we’ve ever competed in and he’s not used to going abroad. It is our best test and best score yet.”

The riders faced the additional challenge of riding the latest shortened grand prix test as part of a pilot project to make dressage user-friendlier. With each test lasting less than five minutes, the movements come up fast; however, it was generally well received by the riders, and regarded as a big improvement to last year’s test.

Katrina Wüst, the judge who was instrumental in writing the shortened version, said: “It is easily manageable for good riders; it is a true proof of thoroughness.”

An appreciative audience gathered earlier in the day at Olympia for a brand-new treat, a 90-minute “Dressage Unwrapped” demonstration, which kicked off the show. Led by three of Britain’s most celebrated dressage riders, Carl Hester, Gareth Hughes, and Richard Davison, it explored all aspects of dressage, including producing, training, and managing dressage horses, what it means to compete, and how to cope with the pressures of competition.

For the masterclass, Gareth Hughes rode his small tour horse Sintano Van Hof Olympia while explaining his training techniques and routine. Following this, Stephen Clarke, one of the world’s top judges, gave live comments and scores on a test performed by Jess Dunn and Alicante Valley, before a highly entertaining duo demonstration by performance manager to Britain’s senior eventing team, Richard Waygood, and one of the country’s best-loved eventers, Pippa Funnell, explained their favourite pole exercises to improve cadence and impulsion. Carl then completed the session by teaching Charlotte Dujardin on her phenomenally talented young superstar, the eight-year-old Gio, known as “Pumpkin.”