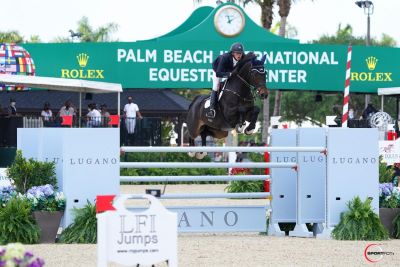 In the final grand prix qualifier of the winter circuit, a total of 63 entries challenged the first-round course set by Olaf Petersen Jr. (GER) with just eight punching their ticket into the jump-off. The seventh-ranked rider in the world, Kent Farrington (USA), elected to save his horse for the weekend leaving a total of seven combinations to contend over a shortened track.

First to return for the jump-off, Nayel Nassar (EGY) paved the way for the rest of pack as he and Lucifer V, a 15-year-old Westphalian gelding by Lord Dezi x Grandeur, put forth a clear effort. Nassar and the Evergate Stables, LLC-owned entry stopped the clock at 40.32 seconds.

Although new to the hunter ring, Prodigy is already making a name for himself with Farmer in the irons. The 10-year-old Dutch Warmblood gelding by Vleut began his hunter career this year and has already proven to be a top competitor. Farmer piloted Prodigy to a fourth place finish in the gelding’s first hunter derby during Premiere Week of WEF in the $25,000 USHJA International Hunter Derby.

“We got him beginning of circuit,” explained Farmer. “He was doing some jumpers and Darragh [Kenny] thought maybe he could make a hunter. I started him early in the circuit, and we have shown him a little bit sporadically on and off in the First Year [Green Hunter] and the High Performance [Hunter]. He is a blast to ride because he is careful, has a great canter, and a light mouth. He always tries hard, and I think he really likes this hunter life. He always gives 110% all the time. I love riding him because you don’t have to pick up the reins.”