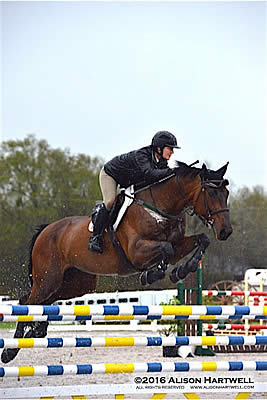 It may be a celebration of the Hunters Week V at the Gulf Coast Winter Classic, but the jumper action continues to be hot!

International Course Designer Leopoldo Palacios of Venezuela was on hand to design the course and set a first round time allowed of 83 seconds. Despite Friday’s rainy skies, sixteen competed in the $10,000 Horseflight Open Welcome and saw five return for the jump off round.

Comley returned to the ring, this time riding her own Can Do It 16 and posted double clear rounds in times of 76.464 seconds and 36.690 seconds, respectively, which temporarily took the lead from Kocher and set the new time to beat.

Brennan and her own Japan were last to go in the class, but two time faults in their first round in a time of 84.252 seconds, would see them finish in eighth place overall and leave her in the winner’s circle with Cord 11.

Brennan commented, “Cord 11 was so fast that I couldn’t beat that time with any of my other horses,” she said. “I love Leopoldo’s courses,” Brennan continued. “Given the weather, it was a really fair course,” she said. “This KCR footing is really amazing,” she added. “We didn’t slip at all, my horses went great and Cord 11 must really like it, because he just flew through this course,” she said.

Final placings in the class had Brennan and Cord 11 with the win followed by Comely and Can Do It 16. Andy Kocher won third place with Prof De La Roque and Comley returned for a fourth place ribbon with Cancum 2. Kocher and Coconut earned fifth place, and Brooke Kemper of Culpeper, Virginia and her own Classified finished in sixth place with one time fault in their first round in a time of 83.167 seconds. Amanda Forte of Glenmoore, Pennsylvania and Cerulean Stables’ HHS Louis took seventh with one time fault in the first round in 83.983 seconds. Brennan returned for an eighth place ribbon in the irons of her own Sun Tzu after earning two time faults in their first round with a time of 84.252 seconds, and she also collected ninth with her own Japan. Tenth and eleventh was awarded to Eagle Valley Partners’ Ciana, ridden by Andy Kocher, and Kocher’s own Red Lady, respectively. Niki Wilcox of Parker, Colorado and her own J.E.S. Quito wrapped up the class with twelfth place.