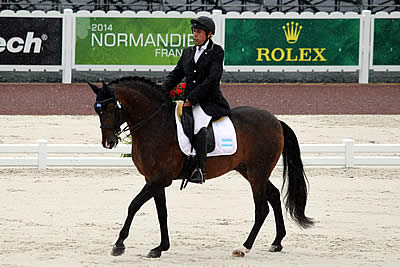 Rio de Janeiro, Brazil (August 28, 2016) – All eyes are on Brazil as the 2016 Olympic and Paralympic Games make their South American debut in Rio de Janeiro, and one equine will be making the most of his home field advantage. Zizifo Interagro (Profano Interagro x Meiga (MAC)), a bay stallion born and bred at Interagro Lusitanos of Sao Paulo, Brazil has been named, along with his rider Pautricio Gugliamelli, to compete for Argentina in the Paralympic dressage competition. As one of just a few Brazilian bred horses competing in the Games, Zizifo and Guglialmelli will enjoy a large cheering section as they vie for a medal against the best Paralympic competitors in the world.

The pair aren’t strangers to international success, having represented Argentina in numerous Paralympic competitions, including the 2014 World Equestrian Games in Normandy, France. Zizifo was purchased from Interagro in 2012 by Gia Einaudi, who was looking for an international caliber dressage horse with the temperament, gaits, and rideability to be successful on the world stage in paradressage. Einaudi exported Zizifo to Italy, where he was paired with Guglialmelli. It became immediately apparent that Zizifo was the perfect match, and they soon began to build an impressive resume.

In the hands of trainer Alessandro Benedetti, who also shows the horse competitively at 3rd and 4th level, Zizifo and Gugialmelli recently put in top performances at the Sommacampagna CPEDI3* in Verona, Italy. Einaudi attributes Zizifo’s exceptional success to his extraordinary character and talent, which is a reflection of over 40 years of careful breeding at Interagro. With a focus on athleticism, movement, temperament, and intelligence, Interagro has succeeded in preserving some of the purest and most sought after lineages of the Lusitano, while simultaneously developing a horse with the raw talent, versatility, and character to succeed in the FEI disciplines.

Zizifo’s Paralympic debut will stand as living proof of Interagro’s legacy, as he and Guglialmelli trot into the Olympic stadium in Rio. “It is Zizifo’s willingness to please and charisma that sets him apart,” said Einaudi. “He requires us to be very precise and correct in training and during competition, which keeps him relaxed and open-minded even in the stress of major international events. Alessandro [Benedetti] has been instrumental in the Zizifo and Patricio’s success, and despite having the demeanor and poise to compete paradressage, under Alessandro Zizifo easily switches gears to the power and elegance of upper level dressage.”

In fact, Benedetti and Zizifo recently debuted at the D1 Level in Italy, comparable to 4th Level in the United States, and won a national competition in Tuscany. Utilizing a careful balance of training in both paradressage and dressage, Einaudi team continues to build Zizifo’s strength and form for Rio. Once they reached the FEI world ranking and competed at the World Equestrian Games in Normandy in 2014, the pair began qualifying for the Paralympics. Three CPEDI competitions yielded the required scores to qualify them for the Games, and in June it was officially announced that Guglialmelli and Zizifo Interagro would compete for Argentina in Rio. With regular training under Benedetti and sessions with Olympian Morten Thompson, in addition to conditioning, a strict diet, and the care of numerous equestrian industry professionals, Zizifo is well on his way to Rio, and the journey brings him closer to his first home in Sao Paulo.

“Needless to say Zizifo means the world to us,” said Einaudi. “He has opened up a world of possibilities, and thanks to him we have achieved more than we ever thought possible in dressage and paradressage. We believe that Zizifo is a once in a lifetime horse!”

For more information on Interagro Lusitanos, Interagro’s horses for sale, or the Lusitano bloodlines, visit Interagro’s website at www.lusitano-interagro.com. To organize a trip to Brazil or for any questions regarding sales or the logistics of importing horses to the US, contact their US Sales Representative, Peter van Borst, at 817 368 9447.