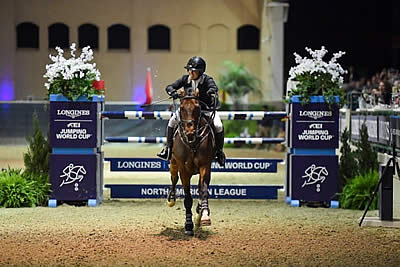 Heading into a five-horse jump-off, Ashlee Bond (ISR) didn’t get to watch the riders ahead of her before entering the ring aboard 8-year-old Donatello.

“My mentality these days is just to go do what I feel is right for me and my horse in the moment,” she said. “Tonight, I just felt a little bit more confident.”

Bond executed her plan to perfection, galloping home to a dominant victory in the $100,000 CSI3*-W Longines FEI Jumping World Cup™ Del Mar (USA). She and her partner of more than two years crossed the timers of Alan Wade’s (IRL) shortened course in 38.82 seconds. Nikolaj Hein Ruus (DEN) and Cadillac claimed second as the only other double-clear performers on the night, finishing in 43.27 seconds. Keri Potter (USA) and Ariell la Sirene finished third in the mare’s World Cup debut; they finished with 4 faults in 44.58 seconds.

“Donnie” was making just his second World Cup appearance in Del Mar after debuting at the level in the North American League’s season opener at Vancouver. The quick win reaffirmed Bond’s belief in the gelding, for whom she has both World Cup and Olympic aspirations.

“As a 7-year-old, he really developed quickly,” Bond explained. “Then this year, everything I ask of him — it might take him a round or two to figure it out, but once he does, he logs it into his computer, and then he makes my job easy.”

Karl Cook (USA), who won in World Cup competition at Sacramento just two weeks ago, notched his third top five finish this season to maintain his strong lead in the west coast sub league standings of the North American League. He boasts 49 points. Bond moved into second place in the standings with 31 points, while Zazou Hoffman sits third with 26 points.