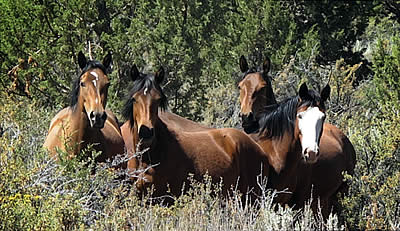 The Department of the Interior, under the leadership of Secretary Ryan Zinke, has signaled its intention to strip decades-old federal protections for wild horses and burros and to allow them to be shipped to slaughter by the tens of thousands. Public comments and Congressional testimony from Zinke and other high-ranking government officials represents the most severe threat to wild horses since the ghastly and cruel killing practices of the 1960s prompted Congress to adopt the Wild Free-Roaming Horses and Burros Act of 1971.

Turning to mass slaughter would mark a U-turn on the government’s response to wild horse management programs. It was only in April that Congress passed a spending bill with sensible wild horse provisions for the remainder of 2017. That bill included language preventing the Bureau of Land Management (BLM) and its contractors from sending wild horses to slaughter for human consumption. It further directed the BLM to create a plan to maintain long-term, sustainable populations on the range in a humane manner.

Now, just two months after President Trump signed the 2017 Omnibus spending bill into law, the Department of the Interior is saying it is going to default to slaughter because it’s possessed with no other options. In the president’s budget request for 2018, the department has asked for the ability to maintain wild horse and burro populations at dramatically reduced levels and to get there by slaughtering the animals.

While there are always going to be major challenges in managing wild horses and burros on our western public lands and in satisfying the diverse stakeholders in the debate, there are certain options that should never even be considered because they are simply outside the bounds of how animals should be treated. Mass slaughter is one of those dreadful ideas, an action that flies in the face of the now longstanding prohibition on slaughter and of the instincts of millions of Americans to protect these magnificent symbols of the American West.

The BLM has never been exemplary at managing horses. Far from it. For 20 years, the agency’s primary strategy for wild horse and burro populations has largely consisted of rounding up and removing the animals from our public lands – an effort that has resulted in tens of thousands of wild horses and burros being kept in holding facilities at a cost now approaching $50 million a year — more than half of the BLM’s annual budget for the entire wild horse and burro program. Partly because the costs of caring for so many captive horses are undermining the larger program, the agency has failed to commit any additional money to implement sufficient fertility control programs, which have been long recommended by The HSUS and the National Academies of Sciences.

The aggressive and widespread use of fertility control is the only way to confront this crisis in the long term. The horses need to be managed, but in a humane manner. Fertility control works, but only if there’s a serious investment in the enterprise on the ground. By preventing the birth of foals, the agency will find itself under less pressure to round up so many horses. Fewer round-ups mean substantial cost savings, since not as many animals need to be pastured and fed in short-term and long-term holding facilities. A capture-and-kill strategy, on the other hand, will only make matters worse, because it will cause the horses to compensate by reproducing at a higher rate on the range.

We cannot readily resolve the politics of managing the captive and free-roaming wild horse populations without a struggle. It won’t be easy to get a handle on this. But one thing is for sure: sanctioning the slaughter of tens of thousands of horses is a disgraceful, shameful idea. It is an unacceptable idea that will produce protests in the streets, from Reno to Washington, D.C. Mass slaughter will happen only over the cries, protests, and interventions of the American people.

Tell Secretary Zinke that you do not support the slaughter of America’s wild horses by calling 202-208-7351.

By Wayne Pacelle as posted on Humane Nation