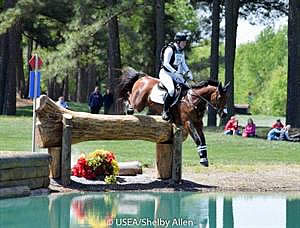 Norwood, N.C. – Maya Black kept a solid grip on her lead in the Adequan Gold Cup CIC3* division this afternoon Doesn’t Play Fair. Tied for second after dressage at The Fork International Horse Trials in Norwood, N.C., the pair bumped into first after a clear show jump round yesterday. Dawn and Jonathan Dofelmier’s “Cody,” a 10-year-old Holsteiner gelding, positively zoomed around this track, finishing 15 seconds underneath the optimum time, which was the fastest round in the three-star. The pair ended the weekend on their dressage score of 41.80.

“He was pretty fresh at the start and in the warm up,” she said. “It took me a few fences to get into a good rhythm, but after I got going everything rode quite well.” Black piloted the enthusiastic gelding well despite his exuberance, and said running this event was great feedback on her spring training.

After skipping the Carolina International this year, the mare came to the Fork off of a win in the Advanced division at Red Hills International last month. “I let her pick her own pace,” Kieffer said, and that pace was right on enough to earn a top three finish. “She’s only run at Red Hills, so she was quite keen to get out there.” Kieffer also reported this track tested her fitness well, and she’s planning on simply maintaining the mare until Kentucky.

After a solid ride around the three-star track, Kieffer had an unfortunate fall off Landmark’s Monte Carlo, another of her rides also slated for the four-star at the end of the month. She reports that both she and the horse are okay after the uncharacteristic end to their cross-country. “I’m going to try to get him into the Intermediate at Ocala next week. I feel like it was a fluke thing, so I’m not panicking much,” she said.

Rounding out the top three was Colleen Rutledge and her own Covert Rights (BFF Incognito x Let’s Get It Right), a 10-year-old Thoroughbred cross gelding. “CR” has been on a hot streak this spring, winning his first FEI event this spring at Pine Top Horse Trials, and then placing 6th in a huge CIC3* division at Carolina International.

“He was fantastic. He was really super and rideable,” Rutledge said. “There was a moment where he shifted his shoulders a bit at the angles brush [at 6bc], but he was really honest. He’s just so easy to ride and he’s game for everything.”

CR is headed for a second trip around Kentucky this month, and Rutledge is eager to best their 11th place finish last year at the gelding’s first four-star. “Making the dressage a little more of the show that it can be, adding a bit more rideability where I need rideability and adding a little more sparkle where I need sparkle [is the plan for Kentucky],” she said.
.
Following the top three ladies, Phillip Dutton claimed the next three spots, finishing fourth with Mighty Nice, fifth with Fernhill Cubalawn, and sixth with Indian Mill for a fantastic showing for the veteran rider.