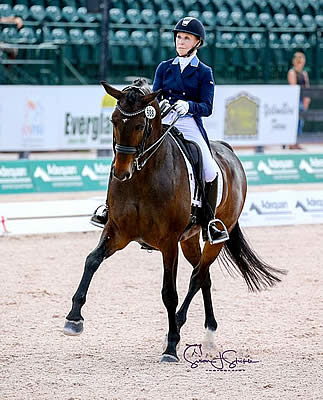 Wellington, FL – March 31, 2019 – On the final day of the 2019 Adequan® Global Dressage Festival, freestyle music sounded throughout the venue as competitors rode their last tests of the season. Topping the FEI Intermediaire-1 Freestyle CDI3* presented by Vita Flex were Betsy Steiner and Swiss W.

There were 15 entries in the Intermediaire-1 Freestyle but with the high score of 76.200%, Steiner came away with the win on Swiss W, a 12-year-old Wurttemburg mare owned by H. Whitney Bailey.

This is the first year that Swiss W has done the CDI Small Tour and this was only their third freestyle.

“She likes that music and springs to it,” said Steiner. “The fun thing is, when she feels really on, the two [tempis] on the centerline you can look the judge right in the eye and think, ‘Watch this.’ When you’re riding, you can see her legs in the changes. You can see her knee and foot go out in front and think, ‘That’s gotta look pretty good!’”

Steiner said of her score, “I was surprised it was so high!”

Steiner found Swiss W in Germany in May of 2015 and it was love at first sight. “She has a wonderful owner,” said Steiner. “When I saw her, I basically said, ‘I don’t think I can live without her.’ And he said, ‘Well, let’s get her and see what she can do.’

“She knew single flying changes and half passes and had some beautiful training that the people from Germany gave her,” Steiner recalled. “I wasn’t so interested in a mare. She was just coming back from a show. She walked off the van and she stops and looks at me for way too long. That was the beginning, the look. Then I saw her and rode her and was in love.”

Steiner is considering moving up to grand prix next year but will let Swiss W tell her when she’s ready.

“She’s got almost everything for it. We have to get a few things more confirmed,” she said. “Before she shows, she really wants to feel like she knows it well. She’s like the girl in school who wants to get straight As.

“She’s very, very intelligent and wants to have confidence in what she’s doing. She would like me to explain things clearly to her,” she continued. “When she has confidence, she would give me her heart and soul and everything. I feel very responsible for being very careful in that training. She’s just been a complete and total joy; she’s a soulmate. She’s so unique and genuine in what she gives back. It’s an honor and privilege to ride her.”