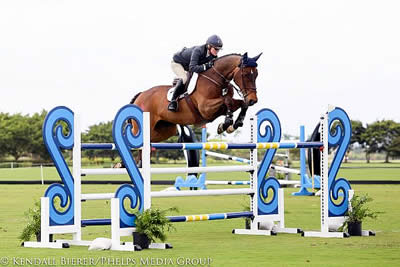 Wellington, FL – March 13, 2015 – For nine weeks, Canada’s Beth Underhill consistently placed at the top of The Ridge Turf Tour series, yet victory seemed to evade both her and her veteran mount Viggo. During Week 10 of the Turf Tour Series, Underhill left nothing to chance, racing to the top of the leader board with Viggo in 33.003 seconds. They closed out the competition only five-hundredths of a second ahead of Sharn Wordley and Popstar Lozonais.

The Ridge at Wellington Turf Tour series saw one of its largest competition days, with over 50 horse and rider combinations traversing Nick Granat’s technical track. Brianne Goutal was the first entry of the day, riding to a double clear effort in 34.411 seconds with Ballade Van Het Indihof to set the pace for the consecutive competitors. Sharn Wordley (NZL) was the first of the 21 jump-off contenders to surpass Goutal, riding Popstar Lozonais to the impressive time of 33.056 seconds.

Quentin Judge nearly caught Wordley, landing from the final fence in 33.122 seconds with HH Dark de la Hart. The 12-year-old stallion has a plethora of experience, and Judge uses The Ridge Turf Tour to freshen up his mount.

“He is a very good turner, you can really trust him to turn back as tight as you want, and he knows where his legs are,” Judge said. “He has so much experience that he finds the way for you, so he doesn’t have to go that fast across the ground. I thought the course was fair, and I think the courses have gotten more technical as the winters have progressed, as they should. Today was a good test, and we are looking forward to the finale in a couple of weeks.”

Nina Fagerstrom and Hot Topic put in a super effort in the jump-off, following immediately after Judge; however, their time of 33.198 seconds put them as third in the standings, pending when Underhill and Viggo took their turn at the track three rounds later.

Until today, Underhill was always the bridesmaid, but never the bride. She took the top placings consistently throughout the 12-week series, as one of The Ridge at Wellington Turf Tour’s most competitive exhibitors. Today, at the International Polo Club Palm Beach (IPC), the winds changed, as Underhill left no stone unturned, shaving the seconds with Viggo on the turf.

“I knew I had to be right on it to be competitive in the jump-off,” Underhill explained. “I walked from one to two knew that if I believe the six strides is there we could do it. It was a bit of a blind turn, but we pulled it off. I feel I did the most efficient track I was capable to do with Viggo. He has a big canter and sometimes spends a little bit of time galloping. He was very smooth and efficient today, and honestly, I think it was his best jump-off of The Ridge so far.”

Underhill continued, “I am so pleased with how consistent he has become. He has been so competitive and consistent each time out that it makes me really pleased to see how well he has responded to being down here. This is helping to prepare him to move up to the bigger classes.”

Underhill’s time knocked Wordley into the second place, with Judge finishing the day in third. Fagerstrom closed out the 1.40m Grand Prix in fourth, while Goutal took the fifth place finish. Chicago’s speed demons Lisa Goldman and Aslan rounded out the top six.

“I think it is a fantastic tour,” Underhill concluded. “I have been able to bring some young horses here, as well, giving them their first opportunity to experience the turf. This series is such a benefit for riders and trainers. We are able to bring our young horses along, as well as many of our students. For me, it is an opportunity to get out and do some great show jumping at a different location. The quality of these competitions is top notch, which is why we keep coming back every week, and why there are more and more of us. People are becoming more aware and really seeing the benefit of competing.”

The second ring was alive with action as the 1.40m Grand Prix action unfolded concurrently. The Low Schooling Jumpers kicked off Jumper Ring 2 with double wins from Emily Snack and Jessika, owned by Centennial Farm. In the speed class, Ned Cuniffe and Dollydoo picked up the second place, while Sarah Wayda and Contentus finished third. During the jump-off class, Alessanda D’amour and Diamon Dance captured the second place, while Cuniffe duplicated his clean and speedy effort from the first class to take the third place with Dollydoo.

In the Medium Schooling Jumpers, Diego Vivero and Big Brother raced to the first place in the speed class. In second place was Jonathan McCrea with Brugal VDL, while Matthew Metell and Everton closed out the class in third. The jump-off class saw a 1-2 finish for Marshall Field aboard Click for Quality and Carpathia K, respectively. Third place was awarded to El Casper with Victoria Guilleksen in the irons.

Week 11 of the Ridge at Wellington Turf Tour will return to The International Polo Club Palm Beach, located at 3667 120th Avenue South in Wellington, FL, 33414. The show entrance is off 120th Street between Lake Worth Road and Pierson Road. Week 11 of the series will offer their jumper classes on Wednesday and Saturday, with the second of their annual Hunter Derby Days taking place on Friday at The Ridge Farm.

The Ridge would like to thank Dover Saddlery for their support of the 12-week series as the cooler and banner sponsor, and they would also like to announce their most recent jump sponsor, Panthera, the leaders in wild cat conservation. Panthera joins Hollow Brook Wealth Management and PJ Saddles as the series’ jump sponsors.

Show Net will be onsite for both Wednesday and Saturday events posting live results, as well as videoing rounds in both rings. For results and videos, please visit www.shownet.biz.