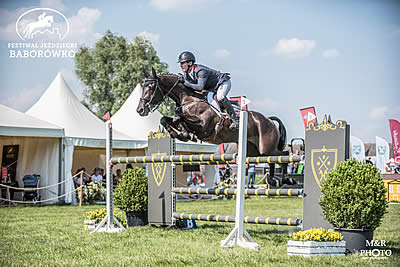 In the hardest competition, the CIC3*, for the prize of the patron of the event, Mr. Roman Roszkiewicz, the audience had an opportunity to see some of the best athletes in the world compete for a record-breaking prize in the history of Polish eventing.

The British rider Oliver Townend has taken the lead in the CIC3* after dressage and kept it. Aboard Cillnabradden Evo he completed the challenging showjumping course without mistakes, and has taken home the first place, with a prize of 100 000 PLN. The second place went to Andreas Dibowski (GER) with FRH Corrida. Third place was taken by Maxime Livio (FRA) aboard Pica d’Or.

In the CIC2*, for the prize of Kuhn, after dressage, cross country and showjumping trials the rider that turned out to be the best was Mateusz Kiempa (POL). After cross country the rider has taken the lead aboard Libertina, and kept it in the showjumping. Second place went to Senne Vervaecke (BEL) with Jeno, and third place to Elmar Lesch (GER) and Rough Diamond.

Some of the best riders in the world competed in the Equestrian Festival in Baborówko, some of them being the current number one in the international FEI ranking, Oliver Townend, number three in the same ranking, Tim Price (NZL), many other athletes from the first hundred and some of the best Polish eventers.

Results are available at: www.festiwal.baborowko.pl.