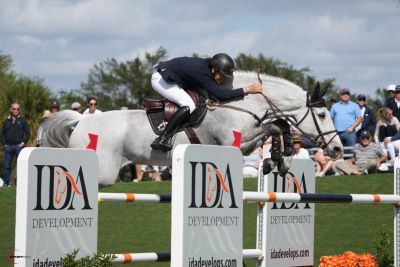 Wellington, FL – February 20, 2022 – The sixth week of the 2022 Winter Equestrian Festival (WEF), sponsored by IDA Development, concluded on Sunday, February 20, with a day full of show jumping on the grass Derby Field at Equestrian Village while hunters continued on the main stage of the International Arena at the Palm Beach International Equestrian Center. Olympian Bertram Allen (IRL) sped to victory for the second year in row in the $140,000 IDA Development Grand Prix CSI3*, this year riding his own Harley VD Bisschop.

Forty-five entries took to the field to contest the three-star grand prix over a course designed by Ana Catalina Harris Cruz (MEX). Fifteen competitors found the key to a clear round, and with one retirement from the jump-off, 14 contested the short course.

2020 Tokyo Olympic Games individual gold medalist Ben Maher (GBR) and Oakingham Stud’s Faltic HB were the eighth to go in the jump-off list, chasing a time of 42.47 seconds set by Harrie Smolders (NED) and Monaco, owned by Evergate Stables, LLC. Maher galloped through the course and set the new time to beat at 40.92 seconds.

The two subsequent riders made a good bid for the lead but finished just off the pace: Conor Swail (IRL) and his own Count Me In were double clear in 41.84 seconds for fourth place, while Nayel Nassar (EGY) and Coronado, owned by Evergate Stables, LLC, finished in 42.30 seconds for fifth place. Barnmate Smolders ended up in sixth place.

Following Nassar in the ring was Olympian Eduardo Pereira de Menezes (BRA) with H5 Sport Horses LLC’s H5 Elvaro. They slotted into third place with a final time of 40.95 seconds, just three-hundredths of a second off Maher’s time.

With the best position in the order, Allen and Harley VD Bisschop were the final combination into the jump-off. With a giant gallop and flowing rollbacks, the pair flew through the timers in a class-winning 39.66 seconds.

Grace Debney and Boheme de la Roque Turn and Burn Their Way to Another Victory in the $25,000 Hermès Under 25 Grand Prix

Young riders took to the Derby Field first thing Sunday morning, with 74 combinations on the list to challenge Ana Catalina Cruz Harris’s carefully designed track for the $25,000 Hermès Under 25 Grand Prix. While the course proved challenging, 15 riders found the clear path to advance to the jump-off. After an electric race over the short course, it was Grace Debney (GBR) and her partner Boheme de la Roque who added yet another blue ribbon to their growing collection.

Ashley Vogel (USA) was the third rider on the grass this morning with her horse Ceres van het Moeshof, and she set the pace in the jump-off, going clear in 41.99 seconds. She would eventually finish in sixth place as the time to beat got faster and faster with each rider who followed.

Two horses later, it was Grace Debney’s chance to turn on the gas with her superstar mare, Boheme de la Roque. They gave it their all to shave just a fraction of a second off of Leahy’s time to claim victory in 39.20 seconds. Leahy finished in second, and Derwin rounded out the top three.