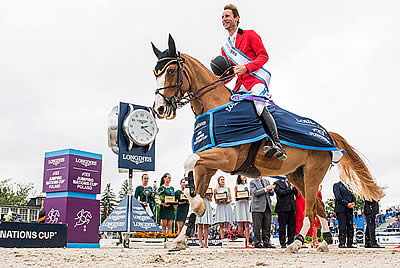 Belgium posted a back-to-back double when coming out on top in the Longines FEI Jumping Nations Cup™ of Poland 2019 staged at the popular seaside town of Sopot (POL). The team included two members of last year’s winning side, Pieter Devos (33) and Niels Bruynseels (35), who were joined by Gudrun Patteet (34) and Yves Vanderhasselt (40) to do it all over again.

But the roller-coaster competition went right down to the wire, the result decided in a tense third-round jump-off against Ireland in which Devos’ chestnut gelding, Apart, rattled a few poles but left all the fences standing to bring it home for the 2018 series champions.

He had only just sealed the jump-off slot in round two when Belgian Chef d’Equipe, Peter Weinberg, asked Devos to take on Ireland’s Paul O’Shea in the third-round showdown.

“I said OK, I’ll do it, and normally Apart is very, very fast, but today he got a bit stressed when we had to go back into the ring almost straight away. But he always gives me everything and hey, everyone is very happy if you are last to go and you win it for your country!” — Pieter Devos (BEL)

It was a very different story at the halfway stage when the Dutch seemed to already have it in the bag after three effortless clears. Belgium, France, and Ireland were all chasing with four-fault scorelines, and Team Germany were close behind with just five on the board, but the French were hampered by the withdrawal of pathfinder Simon Delestre as round two began. So despite clears from Olivier Robert (Tempo de Paban) and Roger Yves Bost (Sangria du Coty), they were obliged to add the four collected by Alexis Deroubaix and Timon d’Aure at the final Longines planks and that saw them lose their grip.

In contrast, the Irish stood firm with double-clears from Paul O’Shea (Skara Glen’s Machu Picchu) and Shane Sweetnam (Alejandro) backed up by a second-round clear from Peter Moloney (Chianti’s Champion), which meant that Bertram Allen (Harley vd Bisschop) didn’t need to return to the ring.

The Belgians didn’t have such an easy run of it when Vanderhasselt’s mare, Jeunesse, hit the second element of the penultimate triple combination. Bruynseels and Delux van T&L had been foot-perfect second time out and Patteet and Sea Coast Valdelamadre Clooney posted the second part of a brilliant double-clear, but if Devos couldn’t leave all the poles in place then he would be handing the top step of the podium to their Irish rivals. Typically, however, he didn’t flinch, and a jump-off was now on the agenda.

You could hear a pin drop as O’Shea led the way against the clock for Ireland, but his 12-year-old gelding hit the first fence before coming home to break the beam in 46.97 seconds. It seemed Devos would just walk away with it now, but the normally fully focused Apart seemed uncharacteristically lacking in concentration and hit the top pole at the first element of the penultimate double really hard, only for it to roll back into place. They crossed the line three seconds off O’Shea’s target time, but their zero score would seal it for Belgium.

Devos was delighted with Apart’s performance: “He has done a lot of great things, and has won many 5-Star Grand Prix and World Cup classes, but this is his very first Nations Cup and to go double-clear and then win it in the jump-off is very special!

“My wife (Caroline Poels) rode him up to 5-Star level and then I took over – he’s a fantastic horse with a great character. When he’s in the ring he gives me everything!” Devos added.

A total of 10 countries are contesting Europe Division 1 this season, and following this third round of the series, Belgium has moved into second place behind the leaders from France. Each country has been allocated four points-earning opportunities throughout the seven-leg league, and Sweden, the only country that has not collected points to date, will be making their seasonal debut at Geesteren (NED) where the Dutch will be hoping for better luck on home ground.

Only the top seven nations in Europe Division 1 will qualify for the Longines FEI Jumping Nations Cup™ 2019 Final in Barcelona (ESP) in October where there will also be one last remaining Olympic qualifying spot up for grabs.